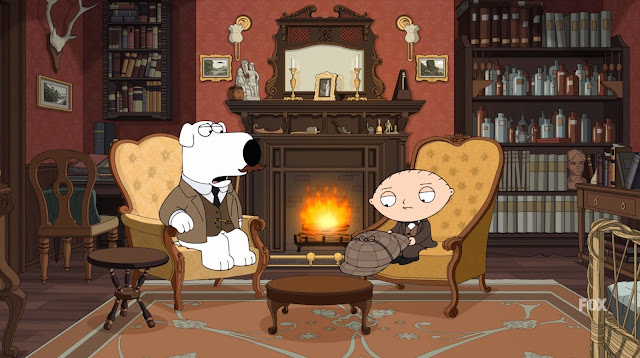 On March 25, 2018, Fox aired the thirteenth episode of Season 16 of Family Guy. The long-running animated sitcom follows the Griffin family: Peter, his wife Lois, son Chris, daughter Meg, toddler Stewie, and dog Brian, and their sometimes mundane, sometimes surreal lives. The episode in question was titled 'V is for Mystery.'

From the opening scene, it was immediately clear that the episode would be different. Usually set in modern-day Quahog, Rhode Island, we were met with strains of music reminiscent of the Universal Sherlock Holmes series from the 1940s, and a scene from London in 1896. And in case it wasn't clear, the episode made it impossible to miss: 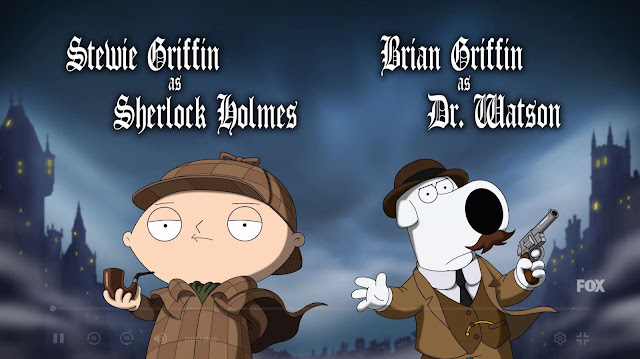 The plot was even inspired by The Adventures of Sherlock Holmes from 1939: Sherlock Holmes solves a case in which the crown jewels are taken by Professor Moriarty. Then, Holmes faces retirement and Dr. Watson announces his impending marriage. Holmes receives a message from Inspector Lestrade about a prostitute is murdered in the style of the notorious Scottish Brute, who killed prostitutes whose name began with "V" and replaced their intestines with bagpipes. But when Holmes and Watson visit Brute in prison, they find he couldn't have committed any of the murders.

As they enter, they come across a prisoner modeled on the character Quagmire. Holmes asks him what he's in for and he replies, "I Rathboned someone's Cumberbatch."

Then using a steampunk prostitute disguise (hey, it could happen), Holmes discovers that the killer is none other than Dr. Watson's fiancee, Constance. 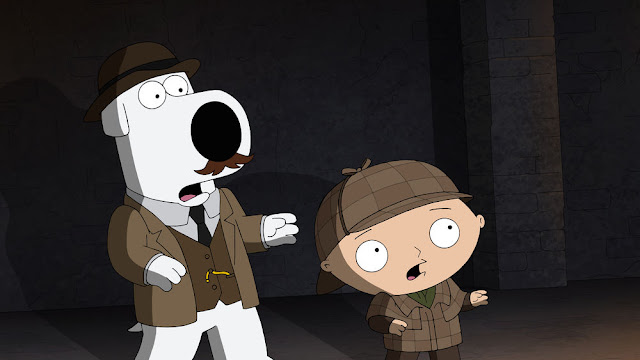 Pursuing her to Paris, they corner her at the top of the Eiffel Tower where she catches her heel, loses her balance, and falls over the side. Before falling to her death, she hints that it is a case that even Sherlock Holmes couldn't solve and "be victorious."

Realizing that they've been misled, they return to London to prevent the murder of Queen Victoria by Professor Moriarty, who created the Brute and whose henchman Holmes had caught with the Crown Jewels earlier, thinking it was the professor himself. 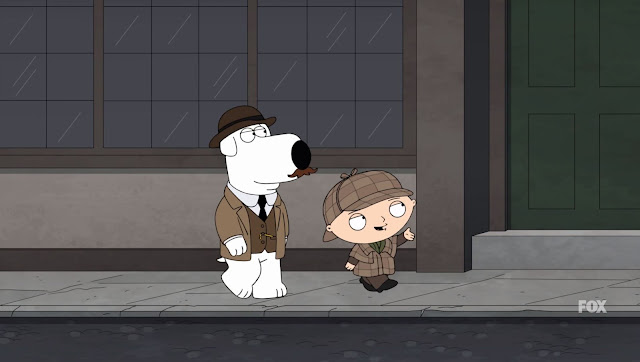 Overall, it was an amusing take on Sherlock Holmes. Clearly, the writers knew their subject matter, and the humor, if it was Family Guy-caliber material, did manage to elicit a chuckle or two. ("Do you have tuppence for the porter? Or maybe even thruppence?" "I've got nuppence."). The interstitial commercial set in the gentlemen's club for Room Temperature Gin was a particularly apt one.

When it's available online - if you have a premium pass to Fox shows - it's not a bad way to spend 25 minutes or so.

And in this case, it's nice to see a mainstream show catching up with fan art. Here's a piece from 2011 from a DeviantArt.com fan, in which they really got the casting right: 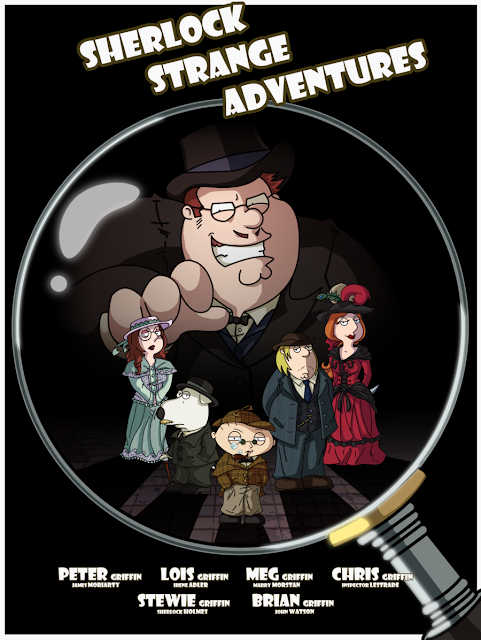 Did you see the episode? What did you think of it?