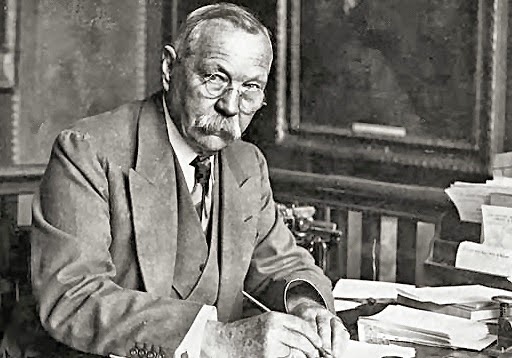 With the ubiquity of laptops and various thin and portable black mirrors (aka phones and tablets), there's no longer a need to have a single place from which to write.

But when Sir Arthur Conan Doyle was writing Sherlock Holmes stories, he needed a place to place his paper as he ran the pen over it. There are many photographs of him at home in his study, where he authored so many of his works, from The White Company to "Lot 249," from "A Night Among the Nihilists" to The Land of Mist, and about recurring characters like Sherlock Holmes, Brigadier Gerard, and Professor Challenger.

There are tales of Conan Doyle writing on the train, at sporting events, and in other unlikely places, as the muse struck him. And as his fame and fortune grew, he was able to afford a luxury from a specialty retailer that could support his need to write during his travels.

It wasn't until 1925 that Sir Arthur Conan Doyle commissioned a travel writing desk from the legendary trunkmaker Goyard. The luxury brand has a fascinating history, including their willingness to accept special orders.

As the Industrial Age continued into the 20th century, international travel became more popular—particularly as immigration laws changed and the travel industry realized that tourism could be very profitable. And the luggage industry changed to support it.

Until then, trunks were the mainstay of transporting belongings — some of them capable of containing seemingly an entire wardrobe. But with the expansion of cruise and then airline travel, trunks gave way to a variety of baggage that could be crafted to coordinate. For many more details and illustrations, see The Rake's A History of the Trunk.

By 1925, Conan Doyle had made several transcontinental trips. To supplement his already significant writing income, he went on the lecture circuit, speaking about his friend Mr. Sherlock Holmes and of his growing fascination with spiritualism. And such long journeys would afford him the time and the ability to relax, read, and write.

But in order to be comfortable and efficient, and to avoid any interruption of his schedule when alighting in places that had no writing desk, Conan Doyle assured that he would always have a place to write through his commissioning of a writing desk trunk. According to Architectural Digest,


"He requested a custom-made trunk that would enable him to comfortably pursue his writing on his continuous worldwide forays. The solution that emerged from Goyard’s workshops was an amazing writing trunk, which was roughly the same size and weight as an ordinary travel trunk but was capable of transforming at will into an actual writing desk."

While such luxury may not be within most travelers' budgets today, there are other ways to pay an homage to times gone by. In fact, we noticed that the Spanish furniture brand JMM has a similar setup. Its HO is a home office in a box, at once a piece of furniture and a cubicle: a console that transforms into a workstation, complete with a file cabinet, shelves, LED task lamp, stool, and integrated power.


It's not quite Goyard and not quite travel-ready, but if you placed your Royal typewriter and some foolscap, a pen, and a bottle of ink on its surface, you might feel a bit like Sir Arthur Conan Doyle, even if only for a fleeting moment.