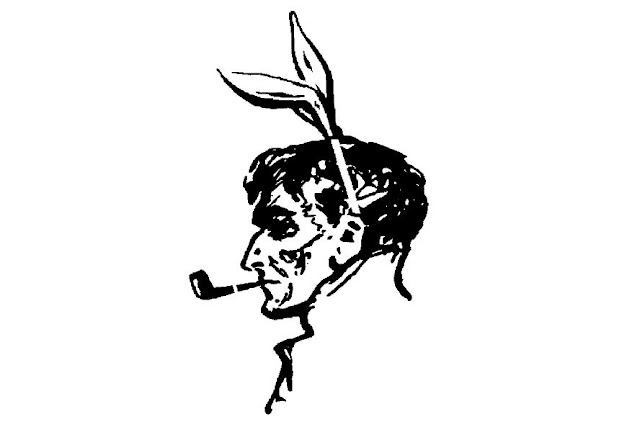 Media and cultural pioneer Hugh Hefner has passed away at the age of 91.

Now, one might logically ask why I Hear of Sherlock Everywhere is covering the passing of the founder of the Playboy media empire. As all things here, it leads back to Sherlock Holmes.

In the very first issue of Playboy magazine (December 1953), Hefner included "Introducing Mr. Sherlock Holmes," from The Sign of Four, with original illustrations from William J. Marsh. It was followed by "A Scandal in Bohemia" in Vol. 1 No. 2 (January 1954) and "The Adventure of the Copper Beeches" in Vol. 1 No. 3 (February 1954). In those early days Hefner could afford to publish only public-domain fiction.

Over the years, Peter Blau, BSI ("Black Peter") has chronicled the various appearances of and connections to Sherlock Holmes in Playboy, making note of it in his monthly newsletter Scuttlebutt from the Spermaceti Press.

In the March 1999 Scuttlebutt, Peter tells us about another early staffer at the magazine who recently passed away:


Horror and fantasy writer Ray Russell joined Playboy magazine as an associate editor in 1954, served as executive editor from 1955 to 1960, and continued as a contributing editor into the 1970s. His satirical pastiche "The Murder of Conan Doyle" (with Foames, Squatson, and Goryarty) appeared in Playboy in Apr. 1955.


And from the November 1995 Scuttlebutt, we learn of Kingsley Amis' contribution:


In an essay on "My Favorite Sleuths" (Playboy, Dec. 1966) Kingsley Amis wrote that "Holmes is the memorable figure he is because Conan Doyle grasped the essential truth that the deductive solving of crimes cannot in itself throw much light on the character doing the solving, and therefore that character must be loaded up with quirks, hobbies, eccentricities. It is always these irrelevant qualities that define the figure of the great detective, not his mere powers of reasoning."


As we crept up to the 1970s, the Sherlock Holmes craze that had captured the public's attention with The Seven Per-cent Solution by Nicholas Meyer, BSI ("A Fine Morocco Case") was also evident. Playboy published an excerpt from Meyer's next novel The West End Horror in the April 1976 issue.

But one of the most noted Sherlockian connections in the magazine occurred just two months prior: the Canonically named Laura Lyons was Playboy's "Miss February 1976." Laura Lyons was of course the typist who was acquainted with Sir Charles Baskerville in The Hound of the Baskervilles. But Hugh Hefner didn't have to do any sleight of hand with a pseudonymn; that was the model's real name.

In Vol. 55 No. 2 of the Baker Street Journal, Leslie Klinger, BSI ("The Abbey Grange") wrote the article "What Kind of Person Reads Playboy? Sherlock Holmes?" in which he provided some background on the Holmes/Playboy connection before interviewing Hugh Hefner. His research unearthed an earlier BSJ article:


"A closer tie between the Holmes brothers and Playboy was the subject of John C. Hogan’s June 1966 Baker Street Journal article “Sherlock Holmes—Was He a  Playboy’?” (Vol. 16, No. 2). The article was subsequently reprinted in VIP: The Playboy Club Magazine (Winter 1966, No. 12)."

And Klinger summed up other nods to Sherlock Holmes in Playboy:


"Pastiches and parodies have debuted in Playboy. In 1975 the magazine revealed the hitherto-unknown Sherlock Jones and his companion Dr. Datson, in “The Adventures of Sherlock Jones” by Sol Weinstein and Howard Albrecht. In 1976, Nicholas Meyer’s West End Horror appeared (in slightly abridged form) in the April and May issues. Kingsley Amis’s affinity for Holmes was further demonstrated in May 1978, with publication of  “The Darkwater Hall Mystery,” a fine pastiche.

"Perhaps most noteworthy is the multitude of cartoons by such renowned cartoonists as Roy Raymonde, Francis Smith (“Smilby”), Mike Williams, and of course Gahan Wilson."

But the real treat in the article is the conversation that Les had with Hugh Hefner. We learn about his earliest contact with Sherlock Holmes (at his public library) and the indelible mark that Basil Rathbone left on him. So much so that Hefner provided funding for the the restoration of the Rathbone and Bruce series by the UCLA Film and Television Archive.

If you would like to read the interview in its entirety, it is available on the eBSJ—the electronic archive of the Baker Street Journal from its inception in 1946 through 2011. Ordering information is available via the link.

Yes, Hugh Hefner was a genuine Sherlock Holmes fan, with a soft spot for mystery overall. He told Les, "Holmes has been so very important to me," and added, "After all, I’m another guy who spent much of his time in his bathrobe smoking a pipe at home!"