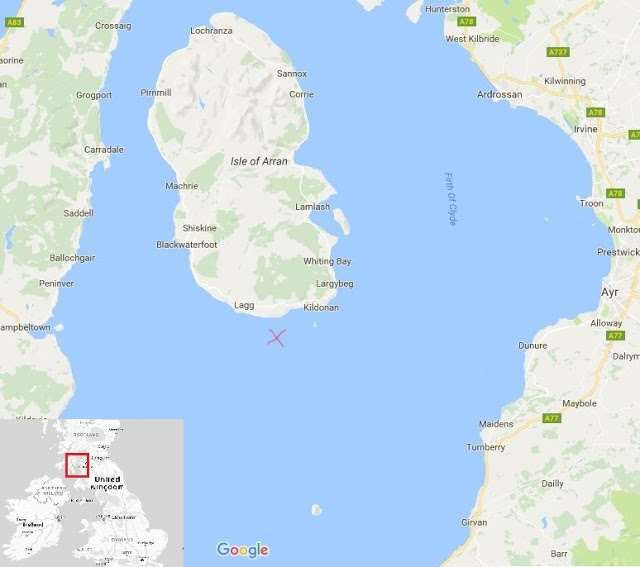 “The Adventure of the Five Orange Pips” gives some of those tantalizing untold tales with which Watson loved to tease his readers:

“the adventure of the Paradol Chamber, of the Amateur Mendicant Society, who held a luxurious club in the lower vault of a furniture warehouse, of the facts connected with the loss of the British barque Sophy Anderson, of the singular adventures of the Grice Patersons in the island of Uffa, and finally of the Camberwell poisoning case.”

The latitude and longitude of the island of Uffa has long puzzled Sherlockian scholars because it exists in no atlas. Robert A. Moss, in his article "In the Island of Uffa" (The Baker Street Journal, Vol 63, No 4, Winter 2013), lists some of the candidates to its possible location. Jay Finley Christ suggested—and Moss concurs—it was a portmanteau disguise by Watson of the islands of Ulva and Staffa in the Hebrides archipelago off the Scottish west coast. Julian Wolff, in his The Sherlockian Atlas, located it as Ufa in the Solomon Islands.


"Rolfe Boswell suggested that Uffa was a large mound constructed by King Uffa of East Anglia, circa 580 C.E. Darrell Schweitzer located it in the fen country of eastern England, where lakes and isles abounded before the fens were drained in the 1600s, leaving behind a great mound that was once the island of Uffa."


August Derleth had Solar Pons and Dr. Parker solving the curse of the Grice Patersons east of the Isles of Scilly, off Cornwall. John Linsenmeyer in the Spring 2017 Canadian Holmes (Vol 40, No 2) posits that Uffa is really the city of Ufa, the capital of the Republic of Bashkortostan, Russia.

They were all looking in the wrong place. They needed to check the Temple Bar.

"Near the right temple?" [THOR]

Temple Bar was one of the leading literary magazines of the day and in the February 1891 issue appeared “Our Midnight Visitor,” the third and final story of Arthur Conan Doyle's that the magazine published. It is a very long short story, about 9,300 words, set on the fictional island of Uffa, two and a half miles off the western coast of Arran, although from the geography mentioned in the story, Doyle clearly meant the southern coast, about where the red x is on the map.

Arran is an island roughly twenty miles long by ten miles wide in the Firth of Clyde off the west coast of Scotland. In August or September 1877, Doyle and his sisters Lottie and Connie took a walking tour of the island. According to Andrew Lycett in The Man Who Created Sherlock Holmes,

“Bounding over the craggy landscape that had inspired Walter Scott’s epic poem The Lord of the Isles, his [Doyle’s] imagination was fired by the Gothic potential of the misty west coast which he would later summon up in stories such as ‘The Mystery of Cloomber.’ His taste for travel and adventure was also sparked by the sight of colossal ocean liners making their stately progress through the waves between Arran and the Scottish mainland, en route to and from Glasgow. The young medical student was beginning to store up meaningful memories of his own.”


“Our Midnight Visitor’ is a reminiscence of Archie McDonald:


"My father had been enabled to send me to begin the study of medicine at the University of Glasgow, and I had attended lectures there for two Winter sessions, but, whether from caprice or from some lessening in his funds, he had recalled me, and in the year 1865 I found myself cribbed up in this little island with just education enough to wish for more, and with no associate at home but the grim, stern old man, for my mother had been dead some years, and I had neither brother nor sister."


Thus, "just before the equinoctial gales in the Spring," the sudden appearance of a mysterious stranger sets events into motion. Doyle gave an appreciable amount of space in the story to the history and geography of Uffa; the three families of the island, the McDonalds of Carracuil, the Gibbs of Arden and the Fullartons of Corriemains; the Roost of Uffa, the channel between Uffa and Arran with at-times dangerous currents; Carravoe where the McDonalds anchor their fishing boat; the Combera cliffs, the trysting place of Archie and Minnie Fullarton; Beg-na-sacher and Beg-na-phail, two rugged knolls in the center of the island.

It is not surprising when in May 1891 as Doyle came to write “The Five Orange Pips”, the island of Uffa was still fresh in his mind as a perfect setting for a “singular adventure” of Holmes and Watson he never intended to write.

"quite familiar to me" [FINA]

As there is a Doylean echo in “The Five Orange Pips” to a recently written Doyle story, there is a Canonical echo in “Our Midnight Visitor.” The visitor, Charles Digby, is a world traveler with scars on his body as souvenirs:


"This was a bullet," he said, pointing to a deep bluish pucker underneath his collar bone. "I got it behind the barricades in Berlin in eighteen hundred and forty-eight. Langenback said it just missed the subclavian artery. And this," he went on, indicating a pair of curious elliptical scars upon his throat, "was a bite from a Sioux chief, when I was under Custer on the plains —I've got an arrow wound on my leg from the same party. This is from a mutinous Lascar aboard ship, and the others are mere scratches—Californian vaccination marks. You can excuse my being a little ready with my own irons, though, when I've been dropped so often." [Ed. note: emphasis ours]


Subclavian artery wounds maybe more common than thought, although Digby could not have been “under Custer on the plains” as Custer went straight to the Civil War from West Point and he didn’t fight in the Indian Wars until 1866. As with "The Gloria Scott", Doyle seems to forget the story's internal chronology. It is a reminiscence of Holmes's college days told to Watson at an unspecified later date, but presumably during 1881 to 1888, when Watson was a bachelor living with Holmes. Holmes' college days would have been in the 1870s. Yet when Judge Trevor's written confession to his son turns up, the events leading to the disappearance of the Gloria Scott are dated both as October 1855 and "thirty years ago". While the mid-1880s would be a fine date for Holmes to be relating the story to the doctor, it would not be for Holmes' university years. In the white heat of writing, such niceties as internal consistency were of less import to Doyle's popular works than dramatic impact.

I also don't think Doyle was doing something meta by connecting the world of "Our Midnight Visitor" to the world of Sherlock Holmes any more than I think he was connecting Professor Challenger in 1912's The Lost World ("The only other evidence which I can adduce is from the log of the SS Friesland, a Dutch-American liner, which asserts that at nine next morning, Start Point being at the time ten miles upon their starboard quarter, they were passed by something between a flying goat and a monstrous bat, which was heading at a prodigious pace south and west.") to 1903's "The Adventure of the Norwood Builder" ("Our months of partnership had not been so uneventful as he had stated, for I find, on looking over my notes, that this period includes the case of the papers of ex-President Murillo, and also the shocking affair of the Dutch steamship Friesland, which so nearly cost us both our lives."). Doyle reused names often in his fiction and aside from the equinoctial gales with which "The Five Orange Pips" and "Our Midnight Visitor," stories Doyle wrote just months apart, open, the Uffa connection seems like an inside joke that he and only a few family members would get.

I was not the first to uncover this link and I didn't think I would be. In my research for this post, I came across this from The Sherlock Holmes Journal, Vol 14 No 2 (Issue 53) Winter 1979, Editorial Notes:


Uffa Riddle Answered ?
HERE is a truly scholarly discovery, one not previously made to our knowledge, for which congratulations are due to J. M. Gibson of Chi-Chester. Mr Gibson it was who came up with the Doyle-Ripper link in the last issue’s Notes: now it’s Uffa’s turn. I need hardly remind readers of the reference made by Watson in The Five Orange Pips -. . . the singular adventures of the Grice Patersons in the island of Uffa.” Where is that elusive island, though? The name has always sounded vaguely Gaelic to me, and many years ago Jay Finley Christ decided that a combination of the names Ulva and Staffa, off the west coast of Scotland, provided the key. I think we can now be certain, for there is corroboration in an almost unknown short story by Conan Doyle. Mr. Gibson has sent in a copy of a journal called Temple Bar: in its February 1891 issue there is a story by Doyle entitled “Our Midnight Visitor”, and the first sentence runs as follows: “On the western side of the island of Arran, seldom visited, and almost unknown to tourists, the little island named Uffa”. . . . There it is, settled! The story that follows is not especially distinguished, but when it appeared, Conan Doyle was only months away from seeing in print the first of his short stories where characterisation, atmosphere and creativity combined together to assure him immortality. A real find, Mr. Gibson, and we salute you!


Since that citation, the "Midnight Visitor" connection still seems to be as "almost unknown" as the story itself.

The island of Uffa is sitting in The Unknown Conan Doyle: Uncollected Stories waiting to be explored. Pasticheurs will find a topography ready for them to use, others find a well-crafted and evocative story ("not especially distinguished" notwithstanding) by Doyle.