"It belongs to the same elementary class" [LADY] 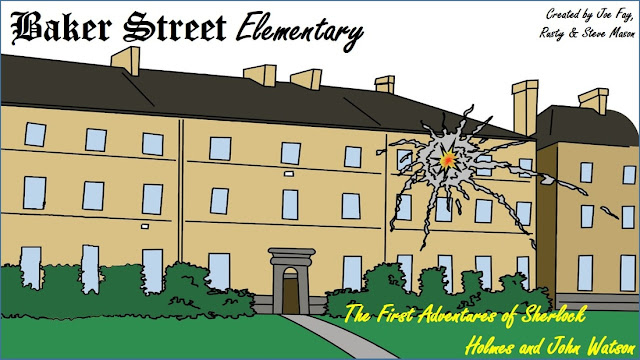 We're pleased to offer a new regular feature to I Hear of Sherlock Everywhere. One of our long-time listeners, Steve Mason, approached us with this singular opportunity, and we couldn't pass it up.

Steve and his son Rusty are big fans of our show (they listen on cross-country trips!) and are keen students of the Sherlock Holmes stories. So keen, in fact, that they've developed an education-related creation of their own. Baker Street Elementary is a comic series that they, together with Joe Fay, created two years ago and brought to life online on the website of their Dallas / Fort Worth-based Sherlockian society, Crew of the Barque Lone Star.

"Baker Street Elementary is one of those rare treats, taking all of the familiar Sherlockian characters and presenting then in a completely original manner. This marvelous creation, the brainchild of Joe Fay (creator & writer), Steve Mason (writer & editor), and Rusty Mason (artist), features Holmes and Watson during their formative years at that long-ago elementary school that might have been…somewhere on Baker Street. The magic this trio produces is evident in every panel of every strip of Baker Street Elementary. There is nothing close to South Park envy here, in fact many of the South Park residents most likely wish they could attend Baker Street Elementary."

With that in mind, and keeping with the tradition of the Sunday comics, we've decided to syndicate Baker Street Elementary every other Sunday here on IHOSE. We (and Joe, Steve and Rusty) would appreciate any feedback you have on the series.

And we we'll kick things off with the very first strip the trio created, from February 6, 2015.

Baker Street Elementary follows the original adventures of Sherlock Holmes and John Watson, as they and their friends work through the issues of elementary school in Victorian London. An archive of all previous episodes can be viewed at www.bakerstreetelementary.org
--