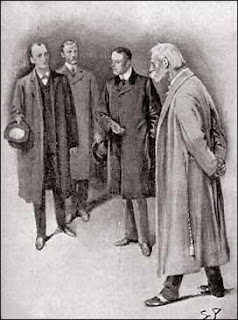 It's a show chock full of Sherlock Holmes news!

Of course, Horace Harker was a reporter for the Central Press Syndicate in "The Six Napoleons," but in our case we're acting in his stead to share some of the most significant news to our own syndicate. We share a special announcement about a future feature of the program which we'll call "The Central Press Syndicate." But in the meantime, we have much to share...

We pick up with a clarification on Lenore Glen Offord ("The Old Russian Woman") and tell you all about the 2011 Baker Street Journal Christmas Annual, in which readers will be able to discover the many aspects of this intelligent and well-published writer. We also question what Investitures looked like under Edgar Smith's and Julian Wolff's time - particularly the presentation of the shilling as a medal. There's an opportunity for your feedback.

Speaking of feedback, we're happy to share a good deal of listener mail and commentary from Episode 54. Thank you for all of your input and intelligent observations. We also note that we've added a function to the site called Speakpipe, which allows our listeners to provide an audio comment directly from the web page while listening to the show. We hope you'll use it.

Over on our Facebook page, every week our fans have a chance to join in the fun with our Wacky Caption Wednesdays. A lineup of some of the recent ones include the iconic image of Holmes hunched over his chemical set and the comparison to Mentos; and Holmes springing to action in "The Speckled Band" with inspiration from DEVO.

On the news front, we have items from the next season of "Sherlock" from BBC One, and news from Steven Moffat that there's a clue that everyone missed with regard to Sherlock Holmes's death. And the announcement of the next installation of the absolutely phenomenal set of events called From Gillette to Brett that look at Sherlock Holmes of the screen. Also events-wise, while we missed the Sherlock Holmes Through Time and Place conference in Minnesota, we'll be featuring a report from the #SHMN13 goings on.

For topics more controversial, we have the latest goings-on around the so-called "Free Sherlock" lawsuit between Leslie Klinger and the Conan Doyle Estate, Ltd., which indicate that a summary judgment is being requested, with the decision due in the coming weeks. And the mid-year letter from the Baker Street Irregulars' Wiggins, Michael Whelan contains a reprint of "The World of Sherlockians" that was shared on the BSJ website

Finally, we concluded with a reading of the Editor's Gas-Lamp on the importance sparking plugs, this time choosing September 1982 (Vol. 32, No. 3). In it, you'll find the definitive and seminal phrase as to what it takes to establish a Sherlockian society.