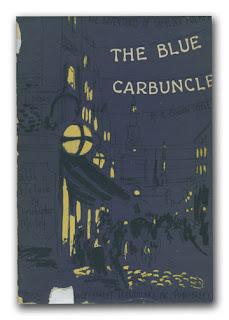 The late 1940s were a Golden Age for the Baker Street Irregulars. The beautiful original series of The Baker Street Journal was in production, and it was in 1948 that the Irregulars took their first plunge into book publishing. This first effort was a deluxe slipcased edition of The Blue Carbuncle. Published in a limited edition of 1500, even this relatively small number was an over-estimation of its initial demand (a common
occurrance for Sherlockian publishers even to this day…) However now, 50-plus years later, the availability of this book is limited. You can still find a copy…for a price, but a good one will cost you a premium.

The Irregulars went on publishing books, and revived The Baker Street Journal when it foundered upon the financial rocks of its own ambition. After decades the BSI did issue books on a scale as grand as this one, but never one with the charm of the 1948 edition of The Blue Carbuncle. While browsing an on-line rare book site, I ran across the following description by an anonymous dealer who describes what The Blue Carbuncle is for Sherlockians perfectly:

Rare, sought, somewhat mystical copy of one of the few publications that the most famous New York-based club dedicated to the scholarly romance of Sherlock Holmes ever produced. This was a Christmas gift idea to the membership back in 1948. There is a great introduction by one of it’s most famous members, the great Christopher Morley and historical background notes by the equally scholarly Edgar W. Smith in the back. Sherlockian Society members were basically encouraged to use this story as a “Read Aloud” Christmas message similar in design and nature to the famous classic “A Christmas Carol” by Charles Dickens. It was also the first time that “The Blue Carbuncle” ever appeared as a story by itself in the form of a book. A reflection of the golden age of private Gentlemen’s Clubs, of large high backed armchairs, of pipe smoke drifting in the air and a rattle of newpapers and tinkling glasses of port or brandy in quiet reflection.

Gone, but not forgotten and I sure wish it were around again.

Introduction by Christopher Morley, Edited w/a Bibliographical Note by Edgar W. Smith. Blue slipcase with a pictorial pastedown on one side.; Blue & White Illustrations.; 64 pages; DeWaal #16.
EDITOR'S NOTE:
We just published Episode 49 of I Hear of Sherlock Everywhere, titled "I'll Have a Blue Christmas." In it, we read from the BSI publication and discuss Morley's timeless essay. You might want to have a listen.