Episode 49: I'll Have a Blue Christmas 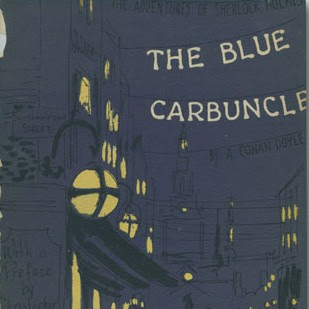 "Compliments of the season" is how Watson described his activities regarding a visit he paid to Holmes during the Christmas season.

And we know "The Adventure of the Blue Carbuncle" as the sole Christmas story in the Canon of Sherlock Holmes stories. And rather than focus on the nostalgic and its place in the lineup of winter classics, we discuss how this classic fits in the pantheon of Holmes stories in its own right as a tale of friendship, crime, discovery and what we've come to realize as some of the typical Baker Street scenes.

In an effort to pay homage to this Christmas classic, the Baker Street Irregulars in 1948 crafted a special edition of "The Blue Carbuncle" that included a wonderful essay by Christopher Morley titled "A Christmas Story Without Slush." About BLUE, Morley said, "it was superb art. It hasn't a word too many or two few." That essay itself has become something of a classic as well, and we're delighted to share it with our listeners here.

After Burt inhabits the person of Morley for our reading, we come to a rather alarming and satisfying conclusion. We would be interested to hear if you share our assessment.

We go on to express admiration for the dramatized versions of the story - particularly by Jeremy Brett and David Burke for Granada and Peter Cushing and Nigel Stock for the BBC. We even invent our own version of Six Degrees of Kevin Bacon with one of the actors who appeared in each.

As part of the holiday season, we also offered up our own - rather eclectic - list of gift ideas and sites where you might find the same. Herewith, the gift giving guide for Sherlockians (or perhaps those from the Steampunk crowd as well) during the holiday season:


The Editor's Gas-Lamp: We round out the show with a reading of "Two Days After Christmas," a version of "The Blue Carbuncle" that takes the form of Clement Moore's classic "A Visit From St. Nick." If you would like to read this poem for your own Sherlockian society meeting, please feel free to download or print it out - with attribution, of course.

Your thoughts on the show? Leave a comment below, send us an email, call us at (774) 221-READ (7323) or drop by our Facebook page. You can also find us on Twitter, Tumblr and Instagram. And check out the new Sherlock Holmes Community on Google+.

And as always, please visit our sponsors Wessex Press and The Baker Street Journal and subscribe to us on iTunes.