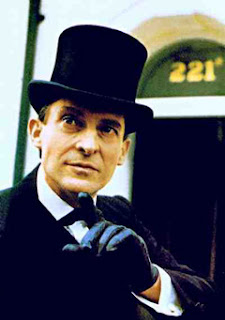 On September 12, 1995 Jeremy Brett passed away. It has now been 17 years since his death - one year for each of the steps that lead from the hall up to the hallowed sitting room of 221B Baker Street.

In A Study in Celluloid (Wessex Press), Michael Cox, the producer of the Granada series noted that often times in script readings, Jeremy would make suggestions the steer the writing toward the Canon, with entire paragraphs of dialog being lifted directly from the original writings. Indeed, the team even had their own reference guide that kept the production crew and cast well informed as to Holmes's appearance and habits called The Baker Street File (occasionally available from Amazon US and Amazon UK).

We personally remember the outpouring of grief and memories that were shared online in 1995 - the early days of the Internet - through discussion forums and listservs, and wonder just how the web would have exploded had his death occurred in the present day.


Brett's career was long and spanned television, film and the stage. And while we won't detail all of it here - sites like The Brettish Empire and But Darlings the Show Must Go On among others pay him lots of tributes - we will share a couple of tidbits that bring us enjoyment as we remember Jeremy.

The first is the opening Baker Street scene in Granada's "The Resident Patient," beginning at 3:47 in the video below. The subtle eye movements, the smile and the general sentiment toward Watson are a wonderful encapsulation of so much of the interaction we see between Holmes and Watson in the Canon.


The second is a rather funny story from David Stuart Davies' biography of Brett, Bending the Willow (Kindle and hardcover: available Amazon US | Amazon UK). As you may know, Jeremy Brett suffered from manic depression and occasionally had bouts throughout the Granada filming. His Watsons, David Burke and Edward Hardwicke were not only both aware of his condition, but were also very supportive. If anything, Jeremy's own sense of humor and frankness came through as this anecdote reveals:

One incident that David Burke recounted brought the house down at The Northern Musgraves' Jeremy Brett Memorial Lunch. It is a tale that reveals not only Brett‘s humour and eccentricity, but also his endearing, self-effacing qualities:
'Jeremy said to me on one occasion, "I was feeling so low the other day that I sent myself a fan letter."
' "Are you serious?"
' "I‘m absolutely serious."
' "What did you write to yourself?"
' "Dear Jeremy, I would just like to say what a wonderful actor you are. Your Sherlock Holmes puts every other attempt at the part in the shade. Basil Rathbone is not fit to clean your boots; and Douglas Wilmer and Robert Stephens should beg you to give them lessons. Your're much prettier than all of them, for a start. There is only one word for your performance - magic. Please send me a signed photograph. Yours, Joe Bloggs. P.S. I've heard that you're really nice person, too."
' "Did you really write that?"
' "Yes, I did."
' "Did you send it?"
' "Yes. I put a first-class stamp on it. I wanted to get it as soon as possible. It came the next morning."
' "And did you read it?"
' "Of course I read it. I read it a dozen times. I felt wonderful afterwards."
' "Well, did you send yourself a signed photograph?"
' "David, I may be mad - but I‘m not barking mad! In any case, the bugger didn‘t send a stamped addressed envelope!" '

Are there any special memories, images or clips of Jeremy Brett that you cherish? Please leave a comment and share them with all of us.

When you make purchases from the links we share, it provides us with a stream of revenue to help keep this site running. Thank you for your generosity.
--
9/12/2012 02:21:00 PM
blog, Jeremy Brett