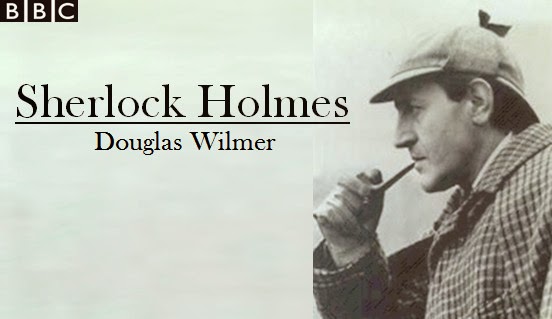 Last November, we announced the availability of the Peter Cushing Sherlock Holmes series on DVD ("What Remains for You?" [SIGN]), which included five episodes on the three-DVD set. But notably, none of the Douglas Wilmer episodes made it into that digital revival.

Today, we're pleased to see that the BBC have come to their senses and released this classic run on DVD, starring Douglas Wilmer, BSI ("The Lyceum Theatre") and Nigel Stock: Sherlock Holmes: 1964-1965 is now available for sale on Amazon (please click through to support this site).

A full 13 episodes on this two-disc set will put you in a distinctly Victorian and Holmesian mood, including "The Red-Headed League," "The Six Napoleons," "The Beryl Coronet," "The Devil's Foot," "The Disappearance of Lady Frances Carfax," "The Speckled Band" and more. This was a groundbreaking series, as they were mostly faithful to the Canon, the production values were fairly high, and the schedule was grueling on the actors (causing Wilmer to bow out, handing the reins to Peter Cushing). It was part of what Wilmer spoke about during his 1998 tour of the United States.

Below you can go to Amazon to purchase this valuable set that has been years in the making. If you're not a Sherlockian yourself, you might consider purchasing this and putting it away as a holiday gift for that Sherlock Holmes fan in your life. And of course, we have other Douglas Wilmer items to choose from below as well.


[Note: Amazon affiliate links. We earn a small commission when you buy these items.]