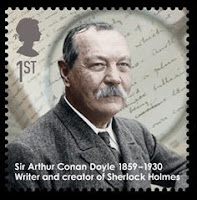 In recent news Sir Arthur Conan Doyle, noted author and creator of Sherlock Holmes - and a Scot, no less! - has been given the honor of his own stamp. The stamp, pictured left, is part of a series from the Royal Mail called "Eminent Britons."
For Sherlockians, the association of philately and the great detective should be nothing new. Holmes and Watson were inveterate users of the communications methods of their day - particularly the post and telegrams. For those who are interested, Hernry Lauritzen, BSI ("The Royal Family of Scandinavia") wrote a landmark piece called The Philatelic Holmes, which is available on Amazon.com (just click the link).
Or for more web-minded folks, you can find a comprehensive site called Detective Fiction on Stamps, on which Holmes has his own section, aptly enough called The Philatelic Sherlock Holmes. There you'll find examples of Sherlock Holmes stamps and Arthur Conan Doyle stamps from Nicaragua, San Marino, Great Britain, Canada, Monaco and many other countries around the world.
I guess you could say that with his creation, Conan Doyle put his own stamp on the world. Sorry, I couldn't resist.
What are those four-letter abbreviations in the headlines?
10/11/2009 12:21:00 PM
blog, books, collecting, Conan Doyle, News