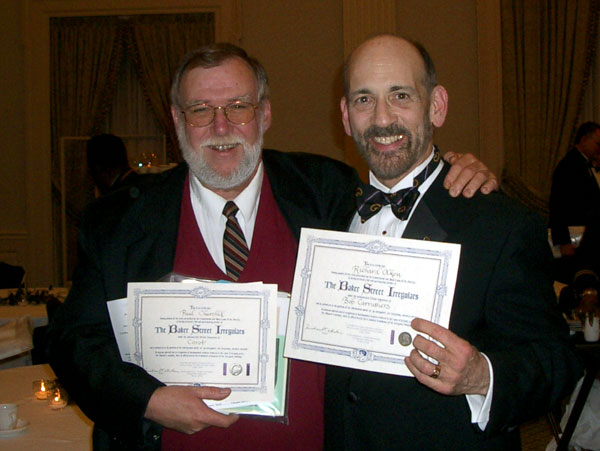 In his annual letter to all Irregulars, the current "Wiggins" Mike Whelan noted that the Baker Street Irregulars have lost 16 of our own in the last 15 months. I know I've detailed many (but not all) of them here. And today I'm tasked with documenting another.

Only this time, it's someone I knew fairly well.

Paul Churchill ("Corot") passed beyond the Reichenbach over the weekend. He had announced earlier this year that he was suffering from incurable cancer; the end came much too quickly for anyone who knew Paul.

Paul received his investiture in the BSI in 2006, but for anyone who knew him, it was a long time coming. He was involved in many Sherlockian societies from the mid-Atlantic states to New England, and his presence was always a jovial and warm one.

Among Paul's many talents was illustration, document creation, and the compilation of "evidence boxes" - his term for artifacts he found, created, and assembled into collections that supported each of the 60 Canonical stories.

In Paul's own words:


I have illustrated several Sherlockian books by authors such as Steve Clarkson, Steve Tollins, Joe Fink, Don Izban Susan Diamond, David Hammer, Patrick Campbell and Chris Redmond, and did covers for a reprint boxed set of August Derleth's Mill Creek Irregulars. With a colleague, I translated the story The Musgrave Ritual into Latin, the first and, so far, only Latin translation of an entire Sherlock Holmes story to be published.

My main specialism is the amassing of Canonical evidence boxes. There is a box for each of the sixty tales. The boxes contain any letter, telegram, weapon, note, receipt, newspaper clipping, or piece of realia mentioned or hinted at in the Canon. My secondary specialism is the creation of genuine faux documents, many of which have seen their way into the packets given out at the annual BSI dinner in NY. Among these documents are Watson's commission, the charter of The Diogenes Club, the citation for Holmes' Legion of Honour Medal, the Bruce Partington plans and a patent for same, the hack licence for John Clayton, the Hotel Cosmopolitan receipt for the Countess of Morcar, the Stapletons' receipt for the Mexborough Hotel in Craven Street, one for the New Street, Birmingham hotel where Hall Pycroft stayed, Watson's chequebook which Holmes kept locked in his desk, the Capital and Counties Woolwich Branch chequebook belonging to Cadogan West and the very naval treaty copied by Percy Phelps.

He was a longtime friend of Steve Clarkson, another Irregular (author of the 2003 BSJ Christmas Annual) who was taken from us too early by cancer. He spent many long hours with Steve, sharing memories and just being a friend. Paul was like that. He was a friend to many, and was never too busy or too involved to chat with or make time for fellow Sherlockians.

Following the service there will be a gathering at American Legion 223 in Sykesville. Directions from the funeral home will be provided at the memorial service.

Greg has asked that in lieu of flowers you might choose to donate to one of Paul's favorite charities, the ALS Association. Many of you know that Paul's beloved wife died from ALS/Lou Gehrig's Disease many years ago.

For those who would like to send cards of condolence:
Greg Churchill
Mark Churchill (Mark lives in Nebraska)
3300 Appleton Avenue
Parkville, MD 21234

This January at the BSI dinner, the task that has traditionally been solemnly and dutifully performed by Irv Kamil will twice as difficult one as the volume of Irregular deaths has nearly doubled. More than that, the prestige, magnitude and general likability of these Irregulars makes these passings that much more doleful.

Scott,
Very sorry to hear of Paul's passing. Paul was a talented artist and a gentleman. I am one of the lucky ones. He illustrated my book, Sherlock Holmes and Doctor Watson: ABout Type. I often think Paul's cover is the best part of the book! We met only once, last year at a scion meeting in Philadelphia. Another Sherlockian giant is gone. May he rest in peace.

I had the rare privilege of receiving my BSI investiture at the same dinner as Paul. It was grand to celebrate together and to reminisce on our Sherlockian lives.

Paul was a wonderful person, warm and caring, talented in a number of ways, and always a happy presence.

He was an avid participant in my principle scion, The Speckled Band of Boston, having won our Sherlock Holmes Bowl for his scholarly presentation and our Band Quiz Bowl for his erudition. He was always eager to help when called upon, composing two of our annual quizzes and illustrating our menus and other works in his inimitable and clever style. He was also our Latin scholar, annually leading the Band in the recitation of the Musgrave Ritual in Latin.

More than anything else about Paul I remember his warmth. He was a fellow who put those around him at ease and added to their enjoyment of the moment.

He will be greatly missed.

I studied Latin at Hood College with Professor Churchill in his final semester here. The memory of his bad puns and witty illustrations will always stay with me; I learned so much from him in the short time I was priviledged to be his student.

I was a student of Professor Churchill at Hood College. I new him from my freshman year to last semester when he retired. We talked a great deal about life and loves. He introduced me to the amazing world of Sherlock Holmes as well. I consider him one of my best mentors and someone I will never forget.

I raise my glass to a brilliant, talented, and wonderful man, who will be greatly missed in our world but never forgotten. To Paul Churchill. Bonus fortuno magister

Scott -
Paul was part of our Maryland Sherlockian family. I can honestly say that he was the most loved member. I don't know anyone who did not have great affection for Paul. We were also the beneficiaries of his supernatural ability to attract Sherlockian artifacts. He shared his "Evidence Boxes" of things that played a part in the Sherlockian stories with every Scion Society in the Mid-Atlantic area. His house was a real Sherlockian Museum, packed from wall to wall with Sherlockian artifacts, and people came from around the world to visit the Maryland Sherlockian Museum. Paul generously let everyone touch the items from the stories. Of course, he was also a co-founder of Watson's Tin Box and took pride that he never missed a monthly meeting in the 19 years that we have been in existence. He was a talented artist, a brilliant Sherlockian, and a good soul. We will always remember him.

Our scion society met last night, one of the few meetings without Paul since he joined us five years ago. It certainly wasn't the same without him. He brought happiness, knowledge, and even new members to our group. He said he liked us so much because we were great fun. No wonder he fit in so well. He was a gentleman and a funster. Our lives are richer for having had him in our midst.

Paul was the heart of Watson's Tin Box. His smiling face was at every meeting I have attended or presided over since I walked into my first Tin Box meeting in 1998. Paul was among the first, along with Steve Clarkson, Debbie Clark and Andy Solberg, to make me feel welcome at those first few intimidating (to me) gatherings.

Paul's Evidence Boxes are legendary. I used to tell him that every Tin Box meeting when he opened up the Evidence Box for the evening's story I felt like a child on Christmas morning. There was always something new...either a find on Ebay or one of Paul's "genuine faux" creations.

Whenever a group of us would take a little field trip somewhere outside of a Tin Box meeting Paul would delight in the trip and in the company. "Isn't this GREAT?!" he'd exclaim, even if it were raining or too hot or cold. He found joy in the small pleasures, and his joy inspired the rest of us.

Paul loved to speak "Bawlmerese," as he called it, exaggerating the accent and pronunciation of words as a native Baltimorean would. Sometimes he'd even write emails phonetically in Bawlmerese that were a hoot to read.

He always greeted me, and every other woman he knew, with a "Hello, Sweetie." Women adored him, men admired him. Oh, hell, everyone adored Paul. How could you not? A truer, kinder, more generous, more gentlemanly a gentleman there has never been.

Paul would count the days from one Tin Box meeting to the next. He was energized by the meeting and delighted by the company of Tin Boxers. "It's time for a fix!" he'd exclaim a day or two before a meeting. And he never missed one.

Tin Box meetings will never be the same without our Paulie. Our individual hearts are broken; the heart of the Tin Box has left us to go beyond the Reichenbach.

Paul taught us to 'live the canon' to go beyond the mere words and research, look outside the box, and learn all you can about the time, geography of the story and each detail. His graciousness to all Sherlockians is legendary and he encouraged all no matter their level of knowledge.

Separate from his love of the canon, Paul was a true gentleman, our conversations covered topics from philosophy to pies. He always made me feel welcome and introduced me to living out loud.

Today was Paul's memorial, and I never attended a more fitting service in my life. Start to finish, it was truly beautiful -- the touching stories shared by Paul's family members, the presentation of "The Case of the Missing Sherlockian" by two of his dear friends, and the bagpiper performing "Taps" during the ritual folding of the American flag to honor this veteran. Mrs. Hudson was even present in period mourning garb, and she was resplendent.

I knew Paul through our mutual membership in the White Rose Irregulars of York, Pennsylvania, and seeing him was always one of the highlights of any meeting for me. He was a proud carrier of the Diogenes Club bag that I designed, and never failed to tell me how many compliments he had received on it. For being someone I only saw four times a year, I loved him dearly.

Farewell to you, good friend; my life is richer for having had you in it, and the world is poorer now that you are not.

Steve Clarkson introduced me to Paul Churchill in the Red Flame, NYC in January 1994. That was the start of a long relationship, and friendship which has many high points and no low points. Paul illustrated and/or provided covers for at least (50)fifty of the publications of The Battered Silicon Dispatch Box, and also under the imprints of Mycroft and Moran and The Other Door.

I remember each project clearly from start to finish. Most would start with a kernel of an idea, a group of words describing a picture, and Paul would translate that into a visual when truly a picture is worth a 1000 words.

Paul and I talked regularly on the phone in September and October 2008.

I will miss him. The Sherlockian World has lost one its leading lights, and I will remember him fondly every time I look at one of the books he created a cover for.