"from amid the mad elements" [FIVE] 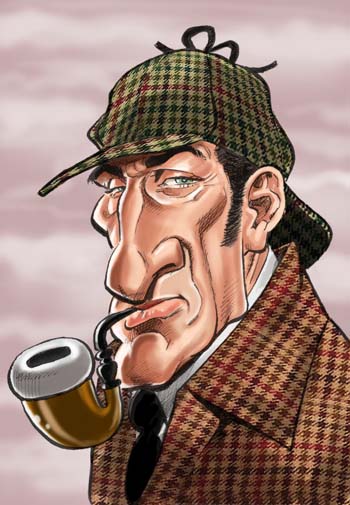 While we may hear of Sherlock everywhere, it's equally as encouraging to hear of Sherlockians everywhere. Ever since the first time we attended a Sherlockian event (a Men on the Tor dinner in October, 1985 at Gillette Castle, if you must know), we've been astounded at the variety of individuals we've met who share this hobby.

The cast of characters is as robust and diverse as those we find in the Canon itself: doctors, lawyers, engineers, tradesmen, housewives, politicians, businesspeople, performers - the list goes on and on. Just last Thursday, I had occasion to be New York City for business and I had an impromptu dinner with some of my favorite fellow Sherlockians. The list included a copywriter, a toxicologist, a lawyer and an accountant.

So imagine our elation (note we didn't say "surprise") when we came across a blog written by Tom Richmond, an artist for MAD, Magazine. Tom is a self-professed "humorous illustrator" and he follows in the footsteps, figuratively and stylistically, of some great MAD artists.

[Side note: Tom later joined us on Episode 65]


In addition to his artistic abilities, Tom has a turn for Sherlock Holmes. He had written previously about listening to some audio recordings by David Ian Davies while he worked in the studio. Evidently, Tom was a bit frustrated that, because of the way Davies' various recordings were published, there wasn't a comprehensive, organized Canon even though Davies recorded every story.

So like any dedicated and enterprising Sherlockian, he took up his pen and wrote to the narrator himself, registering his concern. He requested a collection that would take the listener from start to finish, encompassing all 56 short stories and four novels. Davies responded in kind and as a result, Tom was commissioned to do the cover art for the collection. Talk about an homage!

Audible.com now features this set under the title One Voice Chronological: The Consummate Holmes Collections. While I haven't listened to any of Davies' work, it is well-known and well-regarded in Sherlockian circles. David's site contains high praise from the likes of Charles Prepolec of bakerstreetdozen.com and Roger Johnson of the Sherlock Holmes Society of London.

[David later joined us for Episode 40]


One final note: it's nice to see that Tom is keeping up with the MAD tradition of honoring Holmes. Don Martin, "MAD's Maddest Artist," produced this memorable piece: 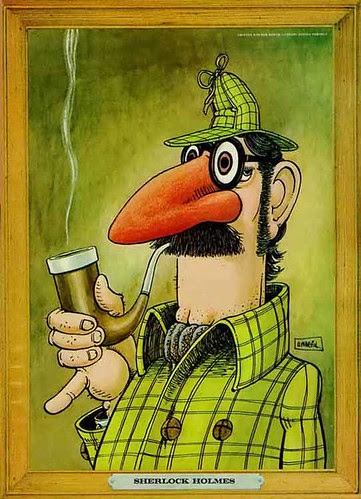 Thank, Scott, for the link. This work is great, and i am so nostalgic with Mad magazine.