"very much shocked by the death" [HOUN] 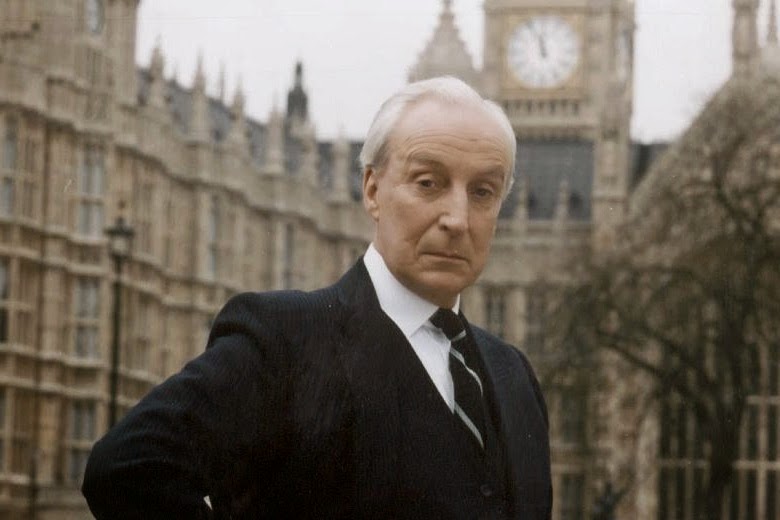 Fans of Sherlock Holmes and of the stage will no doubt be saddened and shocked to learn of the death of Ian Richardson [IMBD profile]. Richardson, known for his sonorous voice and commanding presence died suddenly at the age of 72. Details of his death are available from the BBC.

Personally, we have to admit that we're devastated — Richardson was a favorite British actor.

Hailing from Edinburgh, just like Conan Doyle, Richardson is known to Sherlockians for his portrayal of the great detective in two films, The Sign of Four

and The Hound of the Baskervilles; he also portrayed Joseph Bell, the medical professor of Conan Doyle who served as the inspiration for Sherlock Holmes, in Murder Rooms - The Dark Beginnings of Sherlock Holmes

The role for which he'll probably be remembered best is that of Francis Urquart ("F.U.") in The House of Cards trilogy

. He based his portrayal on Richard III and deliciously includes the audience in his Machiavellian scheming to rise to and maintain his position as Prime Minister.


"You may very well think that; I couldn't possibly comment."

It was just last week on "The Best of Masterpiece Theatre" — a countdown of the top 12 shows as voted by viewers — that he made an appearance related to House of Cards.

The world has lost a great actor and Sherlockians have lost a treasure. If you haven't had the opportunity of seeing Richardson's work — any of it — we highly suggest you take a look.

I first saw Ian Richardson nearly forty years ago on my first visit to the Royal Shakespeare Theatre at Stratford. The matinee performance was 'Macbeth', with Paul Scofield as the Thane. Richardson had the small role of Malcolm - a pig of a part, because Malcolm has to treat poor Macduff very badly, and then convince the audience that he did it from the best of motives and that he's really a Good Guy. Ian Richardson carried it off superbly - the only actor who's really made the character live for me. The evening's play was 'All's Well that Ends Well', in which Richardson played Bertram - a completely different character, portrayed with equal conviction. And always there was that wonderful voice! I was hooked, and I've often felt that Ian Richardson never quite achieved the recognition that he so richly deserved. A CBE, yes - but why no knighthood? He was a very good Sherlock Holmes, though not, I think, a great one, in a couple of competent TV films that had the misfortune to come up against the best of the Granada series, which was far more than competent. He was, though, superb as Joseph Bell in the entertaining 'Murder Rooms' series. Flawed as the films are (they were written by David Pirie), Ian Richardson's performances couldn't be faulted. When I started writing to actors who had played Holmes or Watson, he was one of the first to respond, with a charming couple of letters and a signed photograph. It was a joy to meet him, however briefly, at the Sherlock Holmes Society of London's annual dinner a few years ago. Well, we'll never see him play Lear or Prospero now, and the loss is ours.