"The Second Morning After Christmas..." [BLUE] 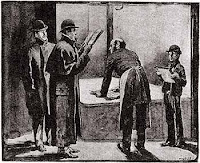 Enjoy. Please note that this is a copyrighted piece. But should you wish to use it at your own society meetings, I'll have no objection.