"It may seem to point very straight to one thing, but if you shift your own point of view a little, you may find it pointing in an equally uncompromising manner to something entirely different." - Arthur Conan Doyle 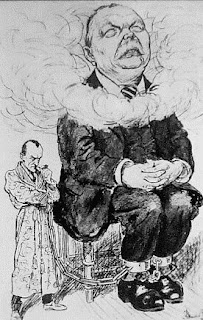 Now Dr. Andrew Norman would like us to believe that - I suppose in addition to all of these other afflictions - Conan Doyle suffered from a form of schizophrenia. Norman's assertion is that Doyle's fervent belief in faeries and voices from the afterlife are evidence that Doyle was a schizophrenic. Now, we're not a doctor - although we did have a year of medical school as part of our education - but Doyle, even with his later belief in psychics, was not a psychotic. He merely had different beliefs than the mainstream. Would current celebrities who embrace [insert wacky religion of your choice here] be diagnosed as schizophrenic? Okay, well maybe a few would.

But the point here is a larger one. It seems that lately, authors in search of publicity simply attempt outrageous headlines to gain attention for their (sometimes controversial) work. This is not limited only to Conan Doyle. For example, a book last year called Abraham Lincoln a homosexual. Some of the examples we've seen recently mentioning Doyle include:
Perhaps it's the nature of the fast-paced world in which we live. The mainstream media believe that the only way to reach mass audiences is with negative, shocking or sensational news. In the meantime, Sherlockians will continue on with our narrowly-focused and very singular interest and block out all of the noise.

It all sounds 'perfectly reasonable' to me, like OJ's story of 'if I had murdered Nicole.'

Sometimes you wonder if people couldn't just write things and see if they could sell on their own merits. Hah! Not the modern way.