You Have Been in Afghanistan, I Perceive 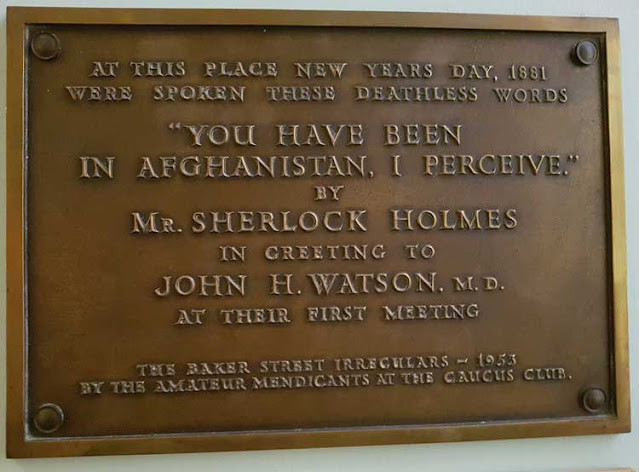 You probably know the first words that Sherlock Holmes ever spoke to Dr. Watson, right?
If you answered "You have been in Afghanistan, I perceive," then you are...WRONG.
After Stamford introduced Watson to Holmes, the exchange went like this:

“How are you?” he said cordially, gripping my hand with a strength for which I should hardly have given him credit. “You have been in Afghanistan, I perceive.”

We're familiar with what you see in the image above—a plaque that was placed in the laboratory at St. Bartholomew's by the Amateur Mendicant Society—which, interestingly, was shared with attendees at its 75th anniversary meeting yesterday. It immortalizes that famous greeting.

“My experience of camp life in Afghanistan” [BOSC]

Since Afghanistan is in the news again, we thought it might be worthwhile to reflect on it briefly.

We're already familiar with that very first greeting. It is the seminal basis of one of the greatest partnerships in literary history. Watson had returned from war, a wounded veteran, looking for a flatmate.

Holmes's explanation later on gave us a taste of how he arrived at his seemingly magical conclusion:

“I knew you came from Afghanistan. From long habit the train of thoughts ran so swiftly through my mind, that I arrived at the conclusion without being conscious of intermediate steps. There were such steps, however. The train of reasoning ran, ‘Here is a gentleman of a medical type, but with the air of a military man. Clearly an army doctor, then. He has just come from the tropics, for his face is dark, and that is not the natural tint of his skin, for his wrists are fair. He has undergone hardship and sickness, as his haggard face says clearly. His left arm has been injured. He holds it in a stiff and unnatural manner. Where in the tropics could an English army doctor have seen much hardship and got his arm wounded? Clearly in Afghanistan.’ The whole train of thought did not occupy a second. I then remarked that you came from Afghanistan, and you were astonished.”

Watson reached his regiment (the 5th Northumberland Fusiliers) safely in Kandahar, before being attached to the Berkshires. It was with this regiment that he received his wound in Maiwand, a small village in Afghanistan.

[Aside: if anyone ever quizzes you on where Watson was wounded, just answer "In Maiwand."]

“I had come from Afghanistan” [STUD]

When the BBC launched its wildly popular Sherlock in 2010, it was written as a modern-day take on the original stories. Indeed, the very first episode, A Study in Pink, was a play on A Study in Scarlet.

Here we find an army doctor, recently returned from war in—you guessed it, Afghanistan—who was looking to ground himself in London. Over to Bart's (which would figure frequently throughout the series), where he was introduced to Sherlock Holmes whose observations were once again uncannily accurate.

Lo and behold, the British (and other NATO forces, supporting the United States) were once again engaged in a long-term war in Afghanistan. The narrative fit perfectly with the repetitious nature of military engagements in the country.

“I endeavored to interest him in Afghanistan” [NAVA]

This is not a modern phenomenon, either.

Alexander the Great arrived in the area of Afghanistan in 330 BCE after defeating Darius III of Persia a year earlier at the Battle of Gaugamela.  His army faced very strong resistance in the Afghan tribal areas where he is said to have commented that Afghanistan is "easy to march into, hard to march out of." (Wikipedia)

Perhaps we should remember Holmes's words in Chapter 3 of A Study in Scarlet:

“Read it up—you really should. There is nothing new under the sun. It has all been done before.”