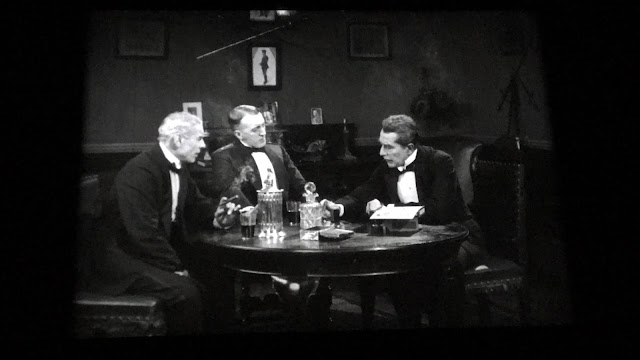 Before there was Jeremy Brett, there was Anthony Edward Brett. Like the modern-day television actor, he played Sherlock Holmes in over 40 films.

But you know him as Eille Norwood.

Most of his Sherlock Holmes films from the 1920s remain hidden from the public, so when the British Film Institute announced a major restoration project, we called Russell Merritt, BSI ("The Trepoff Murder") to enlighten us.

Russell is a silent film scholar, having recently retired from the University of California, Berkley as a professor of film. He was actively involved in the restoration of other recently discovered silent Sherlock Holmes films such as William Gillette's 1916 Sherlock Holmes and the German Der Hund der Baskervilles from 1929.

Together, we go behind the scenes of the Norwood films — a drama itself — and cover the Clive Brook film, as well as Russell's Holy Grail of lost Sherlock Holmes films.

And of course, we have another Canonical Couplet to challenge your acuity. If you are chosen as a winner, you'll get some mystery item from the IHOSE vaults. Answers are due by September 14, 2021 at 11:59 a.m. EDT.

Information on sponsors, links, and notes are available below.

Become a Patron!
Please do consider becoming a Patron of the Arts. Your support helps us to ensure we can keep doing what we do, covering file hosting costs, production, and transcription services.

For our Patreon supporters, we have special photos and video from the 2016 Chautauqua conference, where we screened some Eille Norwood films. This additional material is just for our supporters. Become one for as little as $1 a month on Patreon.

Many more links, articles and images are available in our Flipboard magazine at ihose.co/flipsherlock as well as through our accounts on Facebook, YouTube, Instagram, and Twitter.
Please subscribe via the podcast provider of your choosing:
Listen to I Hear of Sherlock Everywhere
And would you consider leaving us a rating and review? It would help other Sherlockians to find us.
Your thoughts on the show? Leave a comment below, send us an email (comment AT ihearofsherlock DOT com), call us at (774) 221-READ (7323).

We are so grateful for your support on Patreon, which makes our transcripts possible. Every amount helps.
Become a Patron!