“a course of lectures ” [COPP] 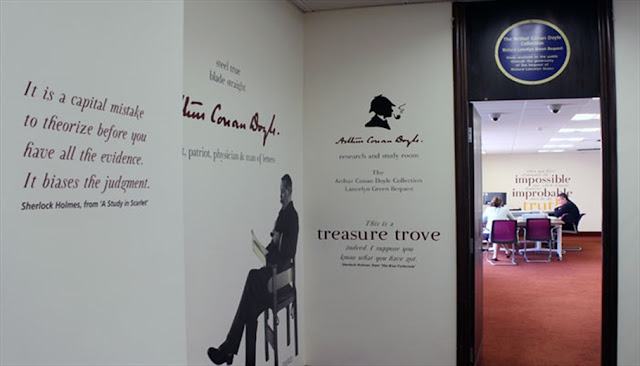 May 22 marked the 162nd anniversary of the birth of Arthur Conan Doyle. His legacy lives on in legions of books, collections, societies, and discussions across the world. And of course, in his most famous creation, Sherlock Holmes.

It also lives on in a new lecture series from the Portsmouth City Council as part of The Arthur Conan Doyle Collection Lancelyn Green Bequest.

Professor Neil McCaw was an individual who promoted his memory in his work and volunteering. Professor McCaw was a professor of Victorian Literature and Culture at Winchester University and became involved in the Collection in 2005, where he spent his time advising on the initial cataloging and identifying it as a unique and diverse collection. Neil McCaw passed away last year.

Neil went on to give wider academic talks globally about the Collection, which broadened our audiences, producing texts for exhibitions that have toured around the world to diverse audiences, writing and producing a facsimile for "The Adventure of the Creeping Man" and then later on curating the You Don't Know Sherlock Holmes, Yet exhibition.

Professor Neil McCaw was a true advocate for the collection, and his expert knowledge and advice have given a legacy to this world-class Collection, maintaining Richard Lancelyn Green's original bequest to make it accessible to the public.

This is the schedule of upcoming talks, all of which are free to the public and will be held on Zoom; registration is required.

Arthur Conan Doyle and the Case of the Parsee Lawyer, presented by author Shrabani Basu

When George Edalji, a young Indian lawyer, is convicted of mutilating horses in a Staffordshire mining village in 1903, he appeals to Arthur Conan Doyle to clear his name. The creator of Sherlock Holmes, accepts the request and proceeds to investigate the case. Based on letters, police records and home office files, Shrabani Basu, author of The Mystery of the Parsee Lawyer, goes on the trail of Arthur Conan Doyle as he wears the hat of Sherlock Holmes and uncovers the dark secrets lying in the English countryside. What is revealed is a story of racism and police corruption at the turn of the century. It is the only case that Conan Doyle investigates personally, with startling results.

Kate is a PhD graduate from the University of Portsmouth and wrote her thesis 'Possessions and Obsessions: Fandom and the Case of Arthur Conan Doyle' in 2015. She is currently Senior Associate Editor for The Conan Doyle Review, an academic journal for Conan Doyle scholars.

Arthur Conan Doyle, money, and the centenary of the Casebook, presented by author Alistair Duncan

This presentation takes a look at the relationship between Arthur Conan Doyle and money, beginning with his early career, before moving onto a brief examination of the final series of stories known as the Casebook - this set of stories turns 100 later this year.

At the height of the Great Depression, a Connecticut Yankee in a deerstalker cap trouped America in the Final Tour of a legendary play about a very British detective created by Arthur Conan Doyle. Tonight’s talk is about the enigmatic actor, his career and his castle, and his role in reviving the Sherlock Holmes franchise to the joy of fans on both sides of the pond.

This should be a marvelous series of events. If you can't make it to Portsmouth in person, this is the next best thing.