Review: A Study in Victory Red

“fond of a particular shade” [COPP] 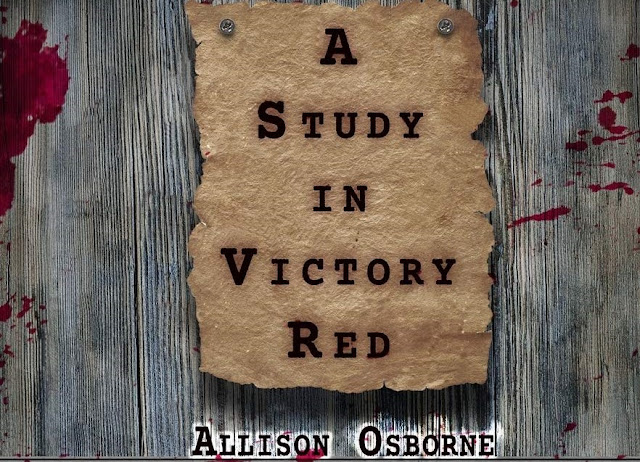 Irene Holmes is in need of a flatmate. Through a series of chance encounters, she meets Dr. Joe Watson, recently returned home from the war. When Inspector Edward “Eddy” Lestrade drops by Baker Street with the details of a mysterious murder, it’s as if destiny itself were pulling the strings.

Though this is the perfect setup for an “alternate history” version of Canon, the novella A Study in Victory Red by Allison Osborne makes clear from the beginning that Irene is Sherlock Holmes’s daughter, complete with childhood memories of Baker Street to provide tiny glimpses of Holmes as a father. Irene’s mother is never mentioned by name, and in fact only mentioned once in the whole story to explain her absence. This is very much Irene Holmes and Joe Watson’s story, the heritage acknowledged but not restraining.

Yet the story is set in 1946, and Irene is thirty years old, which presents a small problem considering Holmes retired to Sussex before the start of World War One. Unless he moved back to Baker Street and abandoned his bees when his daughter was deposited on his doorstep, the dates don’t match up. This might be what happened, but it isn't explained. However, as I said, this is the perfect set up for an alternate history version of Canon, and so we shall stick to it.

Though the setting provides a chronological conundrum, the author makes such good use of post-war society that I was willing to overlook it. Women filled in as men left for war in every industry, why not private investigation? Irene is then forced to confront sexist skepticism when the men come home, despite the fact that the year previous her practice was thriving.

The author comments on the opinions of those who served on those who stayed behind with an embarrassed Eddy admitting to Joe that he didn’t serve because he’d just gained a supervisory position in the force. Joe assures Eddy he doesn’t hold this against him, but many people would have.

Without giving too much away, the murder itself centers around the terrors of war, not in battle but in civilian life, atrocities committed on those whose only crime was to be living in a particular country at a particular time. Details of a London rebuilding itself after the war breathe life into every scene.

So do Holmes and Watson. Irene is very much her father’s daughter, and we are treated to the requisite introduction to deduction scene, but she is also her own character and not just a Holmes stand-in. She is emotional though she tries to hide it, quietly compassionate, skilled at hand-to-hand combat—if a bit rusty—and infuriated by ignorance and incompetence. She doesn’t care about societal norms, dismissing the fact that living with a man she isn’t married to would be frowned upon. Thank goodness there’s a Miss Hudson to keep things proper.

Joe is a delightful counter to this whirlwind. Shy, fond of animals, and suffering “episodes” thanks to his horrific experiences during the war, this Watson is just as supportive of his Holmes as the original, and just as willing to speak up when his friend is about to do something stupid or behaving poorly. The author doesn’t dwell on the details of his trauma, giving just enough information to hint at what happened while still leaving Joe his privacy. This works well as a counter to Irene, who has her own traumatic experiences from the Blitz that she is still working through. They’re fast friends, and believable ones, as two broken people rebuilding their lives in a city rising from the ashes of war.

There’s also a murder investigation, and a well-paced and thought-out one at that. The references to A Study in Scarlet are nicely chosen and the climax of the case exciting, bringing everything together with one or two loose ends intentionally left dangling.

A Study in Victory Red is just the first in what looks to be at least a trilogy, if not a longer series, and I’ll gladly return to Irene and Joe’s Baker Street again.


A Study in Victory Red is available for purchase via Amazon. You can learn a little more about Allison Osborne’s Holmes & Co. series on the author’s website.