A letter from Arthur Conan Doyle to a little girl was recently sold at auction, and it gives us a glimpse into his mind at a critical time in the development of the Sherlock Holmes stories.

The letter and its containing envelope were sold for $12,500. The envelope indicates it was addressed to Miss Ruby Paulson in Mount Sorrel, Loughborough — a small village in Leicestershire. Evidently, Ruby wrote to Conan Doyle expressing her love of the Sherlock Holmes stories and inquiring as to whether there would be more. And Conan Doyle replied in August of 1893 with a charming letter.

Sherlock has become very lazy and I am very stupid so that I am afraid there will not be very many more stories about the strange things that he has done. But both he and I are very pleased when we hear that we have given pleasure to nice little girls. I showed him your letter and he said that your signature showed him that your father was about 45 years of age, that your hair was brown, and that you were a clever little girl with a turn for everything except mathematics. That was what he said, but he smokes too much and has been getting quite muddled lately.

Your affectionate friend
A. Conan Doyle


That Conan Doyle would reply shows his character, both in giving a child the pleasure of a response from an increasingly famous author, and in that he himself was willing to 'play the game,' as he relayed Holmes's sentiments. 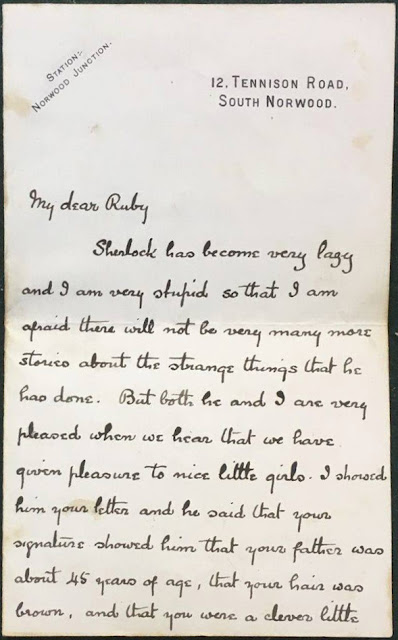 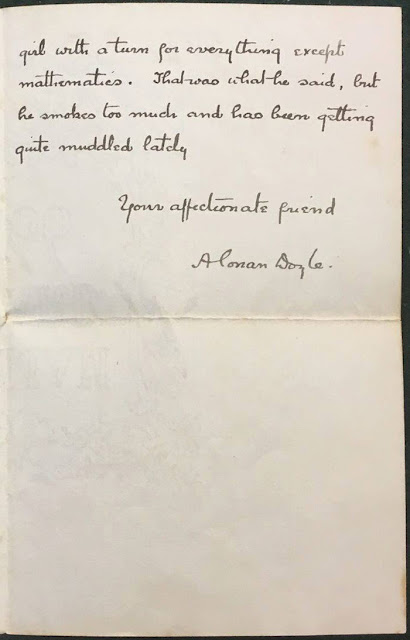 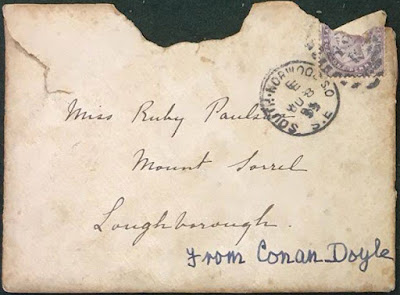 But it also gives us a sense as to his feelings about the great detective at a critical time. August 1893 would have been right around the time that Conan Doyle was either writing about or contemplating the death of Sherlock Holmes. He and his wife traveled to Switzerland that summer, where he first developed the idea of killing Holmes at the Reichenbach Falls, as he had tired of the character and wished to focus his efforts on more serious writing.

However, his reply to young Ruby indicates that he was far from done with Holmes. On the contrary, he demonstrated that the Holmes was alive and well in his mind through his own deductions (as elementary as they may have been). However, he seems to be preparing Ruby for what he know she'll inevitably discover that December, when the Strand Magazine would run "The Final Problem." Namely, that Watson takes up his pen to write "the last words in which I shall ever record the singular gifts by which my friend Mr. Sherlock Holmes was distinguished." Calling Holmes "muddled" gave him a bit of an excuse to allow Holmes to wane gracefully. And also note Conan Doyle's subtle warning about the dangers of smoking in this letter to a child.

And who was the winner of the auction? We don't know. If you're aware, please get in touch with us. But the seller was a distant relative of young Ruby Paulson.

If you're interested in acquiring a Conan Doyle letter of your very own, there's an opportunity in another auction: The Sherlock Holmes Collection of Dan Posnansky.

Thanks to Steven Rothman and Mattias Bostrom for the discovery and link.