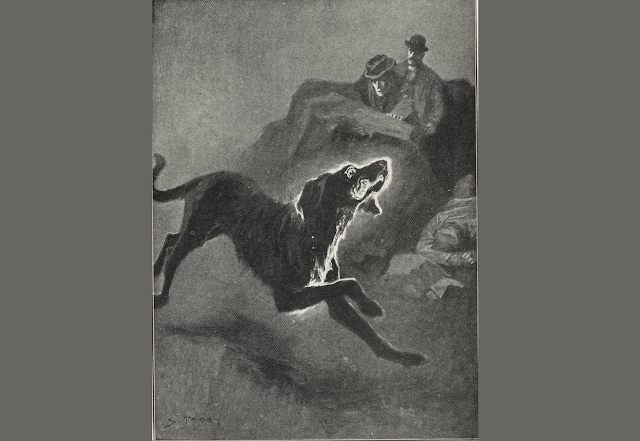 Over the years I've proudly said that I was a full-fledged canine member of one of the noblest and oldest Sherlockian societies — not through any merits of my own, I hasten to add, but because of the leadership's hospitality and courtesy. But I now have reason to think that I've been inflating my credentials all these years.

The story starts in 1981, when I was was already a long-time Sherlockian but not a particularly well-known one. I'd been part of the youth movement in the 1960s, a Baker Street Irregular since 1966, a Bootmaker of Toronto since the society was founded in 1972, and since 1979 the co-editor of the Bootmakers' magazine Canadian Holmes. But I didn't do much Sherlockian travelling, and of course I didn't have the continent-wide network of Sherlockian friends that the internet has now made possible.

So it was kind of a big deal when I was planning a business trip to Chicago (those were the days, when my employer could afford to send me places), got in touch with somebody or other about maybe having lunch with a couple of local Sherlockians while I was there, and was pleased and intimidated to find that my visit coincided with the annual dinner of The Hounds of the Baskerville [sic]. Would I like to attend the event as a guest? Duh; yes I would.

And I did, on October 5, 1981, at a place on North Wells Street called That Steak Joynt (which itself has a rather mysterious history). Under the leadership of Bob Mangler, Master of the Hounds for some forty years, the program included such things as the Hounds customarily do, and a showing of the half-hour "Silver Blaze" starring Canadian actor Christopher Plummer. I remember very little about the evening, to tell the truth, apart from a conversation with a young woman at my table who wanted to tell me about the limitations on women's involvement in Sherlockian matters in Chicago, a topic that I understand has not yet been exhausted 36 years later. (The Hounds didn't admit women members until a couple of decades after my visit, but women guests were welcome at its one meeting of the year. [More on this in Episode 130 of I Hear of Sherlock Everywhere - ed.])

Much of what I know about the traditions of the Hounds, and indeed about the details of that 1981 dinner, is based on an admirable volume that has just been published, a "75th Anniversary Edition" history of the society, written half by John Nieminski (taking the story up to 1983) and half by the present Master, Donald Terras. Launched at the 2017 dinner a few weeks ago, a gala celebration of the society's dodranscentenary, it tells the story in some detail from the society's 1943 founding by the great Vincent Starrett up to the present day. I'm delighted to have acquired a copy of the book, and to find my name on page 59, which confirms my presence at the 1981 dinner and alleges, all too plausibly, that I made myself conspicuous by distributing copies of my little journal, Canadian Holmes, "left and right."

You can order a copy of the the book yourself:
The Hounds of the Baskerville (sic) 75th Anniversary Book

Now here's the thing. I came home from Chicago with a pewter Hounds pin (which I still wear occasionally at Sherlockian events) and the distinct impression that the Master of the Hounds had awarded me an "honorary membership" in the society. I reported briefly on my Houndship at the next meeting of the Bootmakers of Toronto, and was rewarded by a call from long-time Bootmaker (and Baker Street Irregular) David Skene-Melvin: "Now you are officially a son of a bitch!"

But the aforesaid page 59 lists four people who were inducted into Hounds membership at the 1981 dinner, and none of them is me. The historian also refers to "certificates", and if my loot from that evening included a certificate of any kind, I certainly don't know where it is. From which I conclude that my "honorary" status didn't really make me a Hound, and that's a trifle embarrassing, since I have been claiming ever since that I was one.

But who knows? Maybe some year soon, I'll get back to Chicago on the auspicious October night, and betake myself to the annual dinner of the Hounds, and we'll see if they let me in.