"Don't you see now whence these words have been taken?" [HOUN] 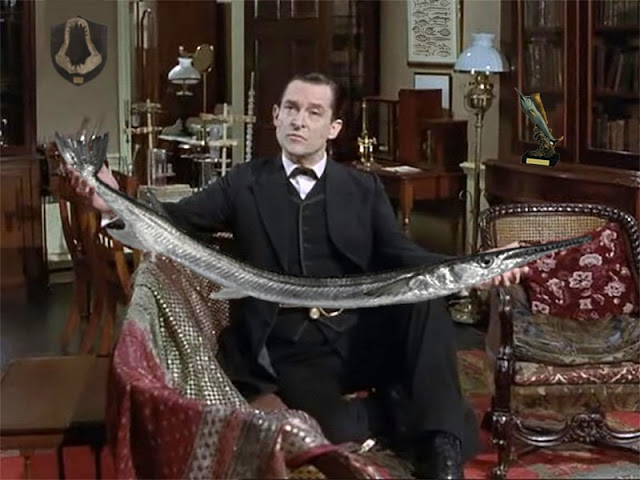 Sherlockians have been writing a torrent of words for a century or more — "Never has so much been written by so many for so few," said Christopher Morley — and many of their ideas, phrases and coinages are burned into my brain. Sometimes, however, they're burned just a little wrong. Here are two examples.

There's an unsurprising tendency for Sherlockians to write about the things they themselves are interested in, no matter how unrelated to Sherlock Holmes. For years I've been telling people that there was an article somewhere, decades past, making fun of that tendency and citing the likelihood that somebody who loves deep-sea diving will ransack the Canon for proof that Mr. Holmes, too, would don diving gear and descend into the depths of the ocean.

Well, I stumbled onto the original recently, and it turns out that nobody could find it because I was misremembering it. The key word isn't "diving," it's "fishing". The source is a letter to the editor of the BSJ from Howard Brody, published in 1981, who describes what he calls "the Egotistical methodology" of Sherlockian scholarship:

He cites "A Scandal in Bohemia," where we learn that Holmes had in his index the biography of "a staff-commander who had written a monograph upon the deep sea fishes." Conclusion: "it is established as clear truth that Holmes spent every spare minute in deep-sea fishing."


"What perverted love can bring about" [THOR]

My other memorable, but mis-remembered, passage was a letter to the editor complaining about references to sex. I couldn't find it in the Baker Street Journal, and the editor of the BSJ couldn't find it even with his electronic aids, for what turned out to be a simple reason: it didn't appear in the BSJ, but rather in the Sherlock Holmes Journal, in 1979.

Again, the source was a letter to the editor, this one complaining about an article on the subject of "Thor Bridge" that had appeared in the previous issue. J.B. Tatum wrote in part:


"Should I wish to read about sexual perversion and penises there are many other readily available magazines to which I might subscribe. One reason that I enjoy Sherlock Holmes so much is that… the Canon is so utterly free of such modern filth."


It was 1979, remember, before explicit fanfic, before "consulting husbands," before In Bed with Sherlock Holmes — though not before Sam Rosenberg's Naked Is the Best Disguise or Larry Townsend's The Sexual Adventures of Sherlock Holmes, so Tatum was being a trifle selective.

Still, his (her?) indignant protest is highly quotable, and next time I have occasion to refer to it, I'll try to get it right.