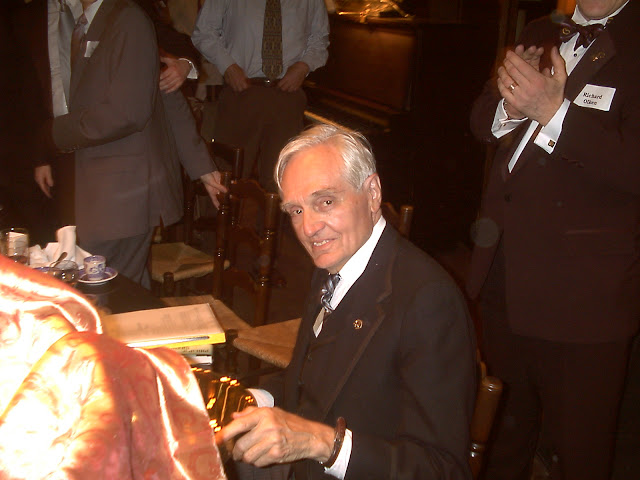 The Speckled Band of Boston has a storied history that traces its roots to the early days of the Baker Street Irregulars. Founded in 1940, it is the oldest scion society of the BSI outside of the New York area (only the Five Orange Pips of Westchester County was founded earlier). And in its long history, the Band has had surprisingly few chairmen (or "Keeper," as the role is currently called).

James Keddie, Sr. was the founder, but he died suddenly in 1943 and was by followed by his son James Keddie, Jr. in the role of what was then called "Cheetah."  The executive leadership of the Band changed significantly in its earliest years. Here, the program from the 50th anniversary of the Speckled Band explains the roles and the roster:


After James Keddie, Sr. and James Keddie, Jr. had served as Cheetah, P.M. Stone was named "Stoker". Next, H.W. Bell was elected Chairman of the Band in 1945, and, following his death in 1947, Douglas Lawson took over as Chairman, later known as the Keeper.


John Constable, MD, BSI ("The Crooked Man") passed away peacefully at home on June 6, 2016, aged 88. He joined the Speckled Band in 1953 and was fortunate enough to know every Keeper since Douglas Lawson. He served as Keeper for 30 years and assumed the role of Keeper Emeritus in the last five years. He received his investiture in the Baker Street Irregulars in 1986.

Our own association with the Band began in 1991, when we enjoyed the now-defunct traditions of the passing of cigars and of the Keeper's amethyst snuff box. But the tradition that remained throughout his years of service is one that touched us deeply: when it was time for champagne after dinner, the Keeper himself ladled it out into coupe glasses for every member. It's a symbolic gesture that conveys that the Keeper serves the membership, and Dr. Constable was no stranger to serving others.

Interestingly—and perhaps foreshadowing his time with the Speckled Band—Constable worked in herpetology in Harvard's Museum of Comparative Zoology. And although he abandoned wildlife conservation as a career in favor of surgery, he served on the administrative board of the Museum and with his wife Sylvia, he organized and led ecotourism trips to India, East Asia and South America.


By the end of the second year I found that surgery has become my greatest interest and I completed a surgical internship and residency at Massachusetts General Hospital. This training was interrupted by 2 years with the U.S. Navy where spent a year as the only doctor on a heavy cruiser in the Formosan Straits. With the help of a generous commanding officer and of the bicycle kept in the upper bunk of my cabin, I was able to see a lot of Japan and other parts of the Orient.

This interest of travel in Asia was given a further boost upon Dr. Constable's application of his medical knowledge for humanitarian purposes. Again, according to the 25th Anniversary Report,

I have been greatly influenced by three trips to Vietnam, none of which was undertaken to work in plastic surgery. In 1967, I went as one of the initial team for the Committee of Responsibility to visit almost every civilian hospital and South Vietnam in order to make the first reasonably complete survey of civilian war casualties. Subsequently I was asked to return by USAID to evaluate the very limited success of American doctors in teaching Vietnamese colleagues. On this occasion I was within three days of returning home when the Tet Offensive of 1968 resulted not only in a considerable delay in my trip and in my seeking Refuge under the bed when our hospital was invaded by the NLF, But also in a great opportunity to work closely with some really superb Vietnamese surgeons. More recently I went back as a medical member of the AAAS team evaluating the long-term destruction of the forest of Vietnam by chemical defoliants and of their possible toxicological and genetic effects on the population.

And of his work closer to home, Constable wrote:


The usual attempt of the academic MD to look after half a dozen half-time jobs at once keeps me professionally very busy with responsibilities in plastic surgical care and a residency training at the MGH and at the Shriners Burn Institute (a 30-bed hospital exclusively for burned children built in association with the MGH); with teaching at Harvard Medical School, and Boston University; and with clinics at the Veterans Administration, Crippled Children's and the Norfolk prison, there is limited remaining time for the private practice that has to support the rest. As a more distant consultant, I and a resident interested in plastic surgery have made annual trips to the Greenfell Mission in Newfoundland, Labrador, where we look after the year's accumulation of plastic cases.

As a permanent monument to his interest in plastic surgery and international travel, Dr. Constable endowed the John D. Constable International Traveling Fellowship in the American Association of Plastic Surgeons. According to the AAPS site,


The fellowship invites an international plastic surgeon to come to the United States under the auspices of the American Association of Plastic Surgeons. The goal is to improve the fellow’s understanding of American plastic surgery and to promote good will and academic interchange among surgeons of the international and American surgical communities. The chosen fellow will be in the United States as an observer for a period of 6-12 weeks under the sponsorship of members of the American Association of Plastic Surgeons.

The whole of Dr. Constable's professional accomplishments and accolades are impressive, including serving as the chief of plastic surgery at the Shriners Burn Institute, assistant clinical professor of surgery at Harvard Medical School, chairman of the Plastic Surgical Research Council, founder of the Indochina Surgical Education Exchange. Because of his extensive work in plastic surgery and research in their country, Dr. Constable received the Order of Friendship from the Government of Vietnam.

In both the 25th and 50th Anniversary Reports, Dr. Constable listed some of his interests and hobbies, and memberships associated with each: the Tavern Club and Somerset Club in Boston; chairman of the Boston Concert Opera, co-chair of the Cambridge Arts Council, and chairman of the conservation committee at the New England Aquarium.


Based on a career laden with such selflessness and service, it's easy to see why Dr. Constable was eager to ladle out the champagne to Speckled Band members every year.

To your editor, there were three things that stood out about John Constable. The first is that his voice was distinctive. One couldn't quite pinpoint the accent; was it English? Or perhaps a patrician-style Boston accent? Combined with a James Mason-like tenor tone, it was one of the most memorable, certainly. Your editor may have even tried to approximate an impression on more than one occasion.

The second is that to us, he will always be "Dr. Constable." That's how he was introduced to us. It's how we always referred to him. To call him "John" just didn't seem to fit. Similar to how hearing "Sherlock" and "John" rather than Holmes and Watson cause us to tense up a bit. Perhaps that bit of Victorian/Edwardian tradition still remained in Dr. Constable.

The third is a memory of a classroom experience in graduate school. In taking a class on medical insurance at the Boston University School of Public Health, your editor was fortunate enough to have had Peter Hiam, former Commissioner of Insurance for Massachusetts, as an instructor. The first thing you need to know is that in Massachusetts, the Commissioner sets the rates for medical procedures; the second thing is that surgeons and the Commissioner have traditionally been on adversarial terms.

So, one day in class, as Prof. Hiam was giving a lecture on insurance rate setting, he recalled a time in which he had to give a speech to a gathering of plastic surgeons at a dinner. To say that he was nervous to appear before his accusers would have been an understatement. Hiam recounted,


"They gave me a polite—but not warm—reception and after my speech, the chairman took the podium, turned in my direction and said, 'Your rates are not...generous, but they are...adequate.'"

At which I point, I raised my hand from the back of the room and asked,


"Was that John Constable?"

The instructor nearly fell over with shock and amazement, and then asked,


"How could you possibly know that?"

It's a long story.

A long and memorable one. Wishing you godspeed and eternal peace, Dr. Constable. 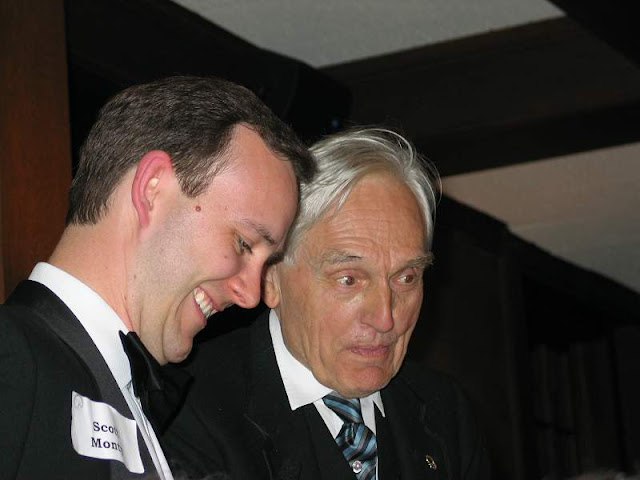 His official obituary can be found here and a longer reminiscence can be found in the Boston Globe; a memorial service will be held in October.