The Effect of America and Americans on Sherlock Holmes 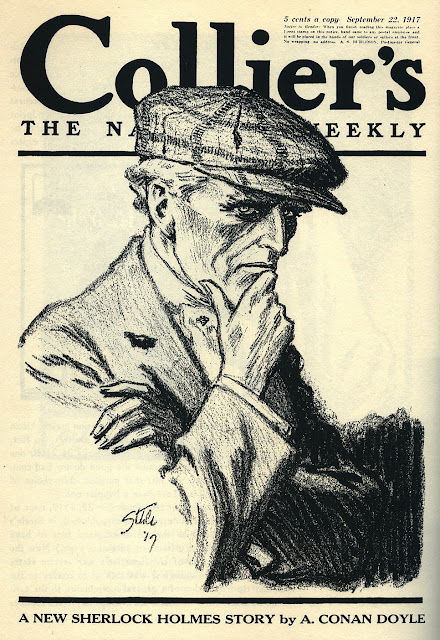 "It is always a joy to me to meet an American, Mr. Moulton, for I am one of those who believe that the folly of a monarch and the blundering of a Minister in far gone years will not prevent our children from being some day citizens of the same world-wide country under a flag which shall be a quartering of the Union Jack with the Stars and Stripes," - Sherlock Holmes in “The Adventure of the Noble Bachelor”.

As we celebrate Independence Day and the bicentennial of the War of 1812 this year, let’s also reflect on the profound effect America and Americans have had on the Canon.

Frank Moulton and Hatty Doran may have been two visitors from across the pond that Holmes welcomed to 221B with woodcock, pheasant, foie gras pie and “ancient and cobwebby bottles”, but most Americans, in Watson’s pages, would be left off the guest list.

There is Jefferson Hope, whose American virtue of tenacity is mixed with that equally American desire for revenge, and tracked his fellow countrymen Drebber and Stangerson to London with deadly results. Revenge was also on the mind of Captain James Calhoun of the “Lone Star”. Protection of the secrets of the Ku Klux Klan led to the deaths of three members of the Openshaw family. Abe Slaney, “the most dangerous crook in Chicago” tracked Elsie Cubitt (nee Patrick) to Norfolk and was willing to kill her husband to possess her. “James Winter, alias Morecroft, alias Killer Evans” even wounded Watson during “The Adventure of the Three Garridebs”. While it was worth a wound to Watson to see the great heart behind the great brain, it’s doubtful the American criminal was on Watson’s Christmas card list.

Ex-senator J. Neil Gibson, the Gold King, may have best exemplified the concept of “the Ugly American” in the Canon. Arrogant, demeaning and used to buying his way, it took the equally strong personality of Sherlock Holmes to put him in his place.

A better representative of the United States is John Douglas, amiable master of Birlstone Manor, a.k.a. Birdy Edwards, Pinkerton detective extraordinaire. As John Douglas he was cheery and genial and as Birdy Edwards, cool, tough and fearless, the qualities that most Americans would like to see in themselves.

There is one other to be mentioned; Altamont, the faux Irish-American played by Holmes in his bid to fool and ultimately capture German spy Von Bork. Holmes spent two years in America, traveling from Chicago to Buffalo to perfect his cover. It’s fitting to remember on this July fourth that Altamont was described as ”a tall, gaunt man of sixty, with clear-cut features and a small goatee beard, which gave him a general resemblance to the caricatures of Uncle Sam.”

Holmes’ dream of a united Great Britain and United States may be no closer to reality in 2012 than in 1887, but the two countries are deeply intertwined in the Canon. As we Americans celebrate the 4th with family and friends; barbecue hamburgers, hot dogs and corn on the cob; and watch the rockets' red glare to the tune of "The 1812 Overture", remember Holmes himself, that quintessential Englishman, liked and occasionally was one of us.