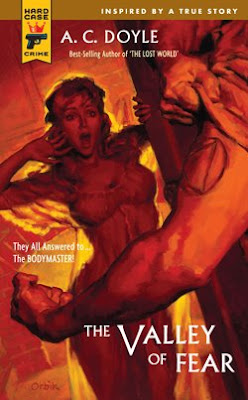 This has to be one of the funniest interpretations of a Sherlock Holmes story I've seen in a while. Fellow Irregular Tom Francis ("The Imperial Opera at Warsaw") passed along the link to the new Valley of Fear, classified as a hard-boiled novel:

YEARS AGO, A P.I. OUT OF CHICAGO BROUGHT JUSTICE TO A DIRTY TOWN.

A sawed-off shotgun blast to the face leaves one man dead—and reveals a secret that has pursued another across an ocean and set the world’s most ruthless criminal on his trail. The man needs the help of a great detective...but could even Sherlock Holmes save him now?

While the original story does have some seedy and lurid details (at least compared to other Holmes stories and for the early 1900s, when it was written), I can't say I've ever considered it "hard-boiled" before. To paraphrase an email exchange on the topic (the author will remain anonymous, unless he wants to "out" himself):
"LOL - 'they all answered to the BODYMASTER!' Good to know A.C. Doyle's career is off to a good start. What's next? 'My shag is good...'"
I wonder what other classic Holmes tales could be creatively classified in different genres, with a humorous twist?
What are those four-letter abbreviations in the headlines?
8/10/2009 12:59:00 AM
blog, books, fun, News

And I thought I like my eggs over easy! What a great idea for getting new interest in the Canon, recasting Holmes as Mike Hammer.