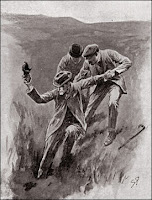 The Hound of the Baskervilles

is probably one of the most widely read and well-known of all of the Sherlock Holmes stories. Of all 56 short stories and four novellas, it has the unique position of being a mystery that happens to have Sherlock Holmes in it, rather than being a Sherlock Holmes tale - due to the fact that Holmes doesn't appear as frequently as he does in other stories.
While it can be argued that the main characters are Dr. Watson, Sir Henry and even the Stapletons to a certain extent, there is another major player in The Hound of the Baskervilles that bears some thought: Grimpen Mire, a deadly part of Dartmoor, which claimed life on a regular basis:

Stapleton laughed. "That is the great Grimpen Mire," said he. "A false step yonder means death to man or beast. Only yesterday I saw one of the moor ponies wander into it. He never came out. I saw his head for quite a long time craning out of the bog-hole, but it sucked him down at last. Even in dry seasons it is a danger to cross it, but after these autumn rains it is an awful place. And yet I can find my way to the very heart of it and return alive. - The Hound of the Baskervilles

This is not just fiction for the sake of good storytelling, though. A recent article from Wired notes that there's lots of life in the "bogosphere," as they investigate some of the strangest things pulled out of bogs. These include nearly 300 kegs of butter, weapons and yes, bodies. Evidently, the chemical and biological composition of the peat in the bogs acts as a natural preservative.
If you're into this kind of thing, you can also check out the exhibition The Mysterious Bog People.
For peat's sake!
What are those four-letter abbreviations in the headlines?
8/23/2009 07:42:00 PM
blog, fun

Have they found the pony yet?

Just a note about HOUN. I maintain the Database of Sherlockian pastiches, parodies and related fiction which currently contains 7,950 items. Among other things, it lists which items contain characters and/or events (other than Holmes and Watson) from the various Canonical tales. HOUN is far and away the most popular tale for such things, with at least 116 items that cite it. The next closest is FINA, with a mere 66 entries.

Much of HOUN's popularity is expressed in Plays, movies and TV series episodes, for which it is the most popular subject of all the 60 tales.