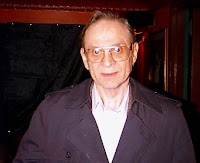 The Irregulars have lost another one of our own. Joe Fink, BSI ("The Martyrdom of Man") passed away yesterday after many years of declining health. I first met Joe many years ago at an "Autumn in Baker Street" weekend, where I was impressed with his rapier wit and deadpan delivery. To say Joe had a dry sense of humor is akin to saying that Sherlock Holmes liked tobacco.
One of the things that always struck me about Joe was that he as such an unassuming, seemingly retiring and quiet man, yet he could bring the house down with a single line or an unexpected quip that everyone could appreciate. He was a giant in the world of humor. Unfortunately, it's been too long since I actually witnessed him in action, so I don't have a specific anecdote to share - perhaps someone reading this would like to contribute?
Speaking of anecdotes, Joe had plenty to say, and he made some of his talks and papers available in 1998 when he wrote Joe Fink Tells Tall Sherlockian Tales, published by the Battered Silicon Dispatch Box.
Joe was a member of a number of Sherlockian societies - most notably the Baker Street Irregulars and the Adventuresses of Sherlock Holmes (investitured as "Tonga") - as well as a few local societies such as the Epilogues of Sherlock Holmes, Mrs. Hudson's Clifdwellers of New York and the Montague Street Lodgers of Brooklyn.
Please share a story (the funnier the better) about Joe below in the comments section. Our collective memories will help him live on for future generations.
5/10/2009 02:21:00 AM
blog, BSI, terrace