"...swear that they have seen such a creature upon the moor" [HOUN] 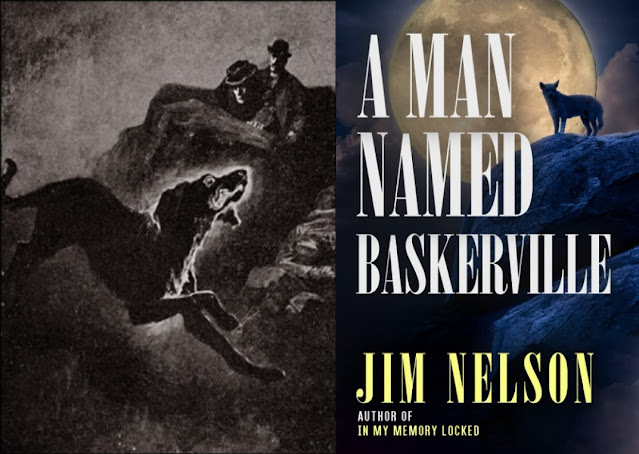 In full disclosure, The Hound of the Baskervilles remains one of my favorite stories. This is due to Watson's role, the story itself being counter to the literary agent's interest in the supernatural, and the timing of the release of the original story. After mourning Holmes's demise, this would have seemed a great gift.

Jim Nelson's A Man Named Baskerville seeks to turn the narrative of the Hound on its ear by a clear assertion that Stapleton's father and by extension, he, are the real victims. For simplicity, the man named Baskerville, will be referred to as "Stapleton" in this review.

Telling two detailed stories in parallel is a challenging undertaking, juggling the flow of multiple story lines. Long sections of expository narrative were used in Part II of A Study in Scarlet or the journey back in time and location to which we are invited in Part 2 of The Valley of Fear. Instead, this book flips back and forth between the events after the story that we know, and "Stapleton's" dark origin story.

One of the threads is memoirs that evolve from short-hand journal entries to a more formal memoir as Stapleton and the current story pick up steam. In the other thread, we follow Stapleton through several aliases and situations as he travels from South America to Central America to the north of England where is the headmaster of a school in Yorkshire.

We track the events in his progress during his quest to exact revenge and obtain his true inheritance. The body count and swindled victims grew, as the original targets of revenge are joined by those who had grown suspicious or inconvenient.

Not surprisingly, Stapleton told a story that put Sir Charles in a bad light. Rather than the published version of the Baskerville's story, Sir Charles' treatment of his young brother in this version is unfathomable. Then Stapleton dragged Sir Henry, Holmes and Watson into tha­­t same unflattering light.

We most often see Holmes through the eyes of Watson, rarely though his own eyes ("The Blanched Soldier" and "The Lion's Mane") or, most rare, through a third person ("His Last Bow").

Sometimes we hear reports of how Holmes is viewed through a villain's eye, usually underestimating him or spouting erroneous assumptions such as Dr. Roylott's calling Holmes "the Scotland Yard jack-in-office" ("The Speckled Band").

But it is difficult to imagine a Victorian man dancing around a corpse. While this is offered as an unfiltered view, perhaps this is a clue to some of the distorted alternate versions of events offered by Stapleton.

Not unlike the original telling, both stories hinge on the fact that Stapleton could have progressed in his schemes by impressing the members of the British elite with his accent and social engineering skills. This telling also hangs on the belief that the people around the moor knew everything, and that Holmes had either been fooled by them or was too incompetent to uncover the truth.

It was a tad disappointing that there was so little attention to Laura Lyons. Given that there was more to their story together, the book does not expand on what we knew from the original canon.

Threads of Stapleton's misogyny are woven through the "love and punishment" training approach that he uses for both animals and people. Sir Henry bargained for Beryl's hand as one would purchase livestock.

While this tale is intended to be Stapleton's counter to what Watson's published version of the events would be, it rather exposes a horror within that cannot be saved by the loyalty of a good friend, the love of a woman or the faithfulness of a dog.


Note: a complimentary copy was provided for review.