"set up a female establishment" [STUD] 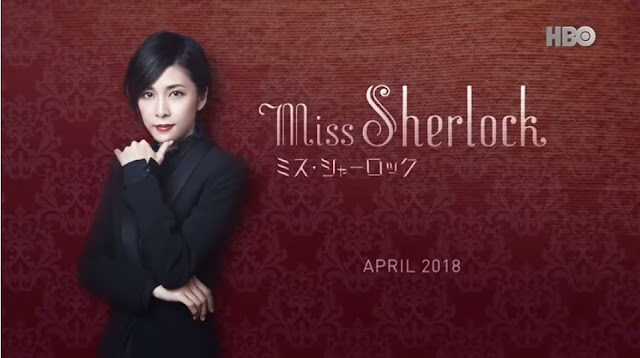 In "The Adventure of the Second Stain," Sherlock Holmes said to Watson, "the fair sex is your department." But now it seems that it is ours as well.

We've seen a number of strong female characters in recent productions on the screen. Of course Lara Pulver as a strong female lead as Irene Adler in Sherlock from the BBC in "A Scandal in Belgravia." [Editor's note: listen to our interview with Ms. Pulver here] And we've also been treated to a female Watson in the guise of Lucy Liu as Dr. Joan Watson in Elementary — and another strong female as an antagonist in that series, which for spoiler purposes, will go unnamed.

Now, from HBO Asia and Hulu Japan, we have a new series featuring a different kind of female lead: Miss Sherlock. Both Holmes and Watson will be women in this version.

According to HBO's site,


Miss Sherlock pays homage to the classic by Sir Arthur Conan Doyle, Sherlock Holmes, with bold interpretations of the iconic characters, Sherlock Holmes and Dr. John Watson. Miss Sherlock is set in modern day Tokyo and both lead characters are Japanese women – Dr. Wato Tachibana, a surgeon recently returned from a volunteer doctors’ mission in Syria and Sara Shelly Futaba, an investigation consultant to the police department who solves bizarre and difficult cases. Throughout the series, the pair solves mystery after mystery with Miss Sherlock’s extraordinary observation and reasoning skills.

Premiering in April 2018, Miss Sherlock, "the most beautiful Sherlock ever," will be shown across 20 Asian countries. This no doubt means that it will be translated or at minimum subtitled (as the trailer below is). We can only hope that this continues to include English for viewers who do not speak Japanese.

It will be interesting to see the reaction from our friends in Japan, a country which has long been a hotbed of Sherlockian activity — the Japan Sherlock Holmes Club historically has had members numbering in the thousands and was the source of the first edition of the Baker Street Irregulars International Series, Japan and Sherlock Holmes. The last time Japan had a television show about Sherlock Holmes was 2014 with the puppetry show Sherlock Holmes and the animated Sherlock Hound from the mid 1980s.