Interview with David Marcum on Sherlock Holmes: Before Baker Street

"before my biographer had come to glorify me" [MUSG] 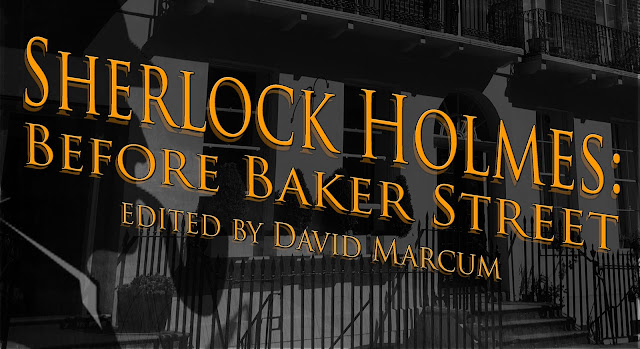 Sherlockian editor and author David Marcum is always involved in multiple Sherlock Holmes projects. He just released the highly successful two volume anthology Holmes Away From Home: Tales of the Great Hiatus, and the sixth volume of his legendary The MX book of New Sherlock Holmes Stories will be released on May 22nd. Between these two anthologies, Mr. Marcum decided to go back to the early days of Sherlock Holmes and edit the anthology Sherlock Holmes: Before Baker Street which is currently being funded via a Kickstarter campaign.

We asked David about the days of Sherlock Holmes before he met his Boswell.

I Hear of Sherlock Everywhere: Holmes and Baker Street seem inseparable. Why set a story collection outside of 221B Baker Street?

David Marcum: The simple answer is that there is so much more to the story of Sherlock Holmes than what occurs during the Baker Street years, or what is presented in the pitifully few 60 stories of the original Canon.

I play The Game with deadly seriousness. The Game postulates that Holmes and Watson were real historical figures. Being real, they had childhoods and old ages in addition to those other more famous times of their lives that spring so easily to mind. Having read and collected and chronologized literally thousands of traditional Holmes adventures over the last 40+ years, I’ve seen all parts of Holmes's and Watson’s lives chronicled – youth and old age. For instance, there are stories that are set in the 1840s, where Holmes’s parents meet and marry. Many tales show incidents in their boyhoods and on into young adulthood. These only help to add to the rounded picture of our heroes. There was a lot of living and learning that went on for both Holmes and Watson before they first met in that lab at Barts on January 1st, 1881, when they were 26 (almost 27) and 28-½  years old, respectively.

There can never be enough new Holmes stories, but it certainly doesn’t hurt to fill in the cracks in certain areas, such as reading about what happened before Baker Street.

IHOSE: You’ve written extensively about Holmes’s residence in Montague Street, his lodgings just before moving into Baker Street. What are some interesting characteristics about this time and place in Holmes’s life? How does this setting come into play in some of the Before Baker Street stories?

DM: Many of the stories in Sherlock Holmes: Before Baker Street are set in Montague Street, and we see Holmes acting with confidence, but sometimes with a lot still left to learn. Personally, I’m fascinated with this time in Holmes’s life, when he was in the process of becoming the individual that’s admired the world over. On all three of my Holmes Pilgrimages to London (and other parts of England), I’ve visited Holmes’s lodgings at No. 24 Montague Street, and on the second and third Pilgrimages, I was even fortunate enough to stay there, as it’s now part of a small hotel.

Holmes explains in “The Musgrave Ritual” that, before he moved to the more famous Baker Street, he settled in Montague Street, next to the British Museum, where he set about learning his craft. This was the time when Holmes had come up to London to create a new profession, that of a Consulting Detective. Before that, he had been a university student, likely preparing for a conventional career. (Famed Holmes biographer William S. Baring-Gould indicated that Holmes’s father wanted him to be an engineer.) Although he’d had numerous adventures growing up and while at school, as chronicled in various narratives, Holmes hadn’t really considered becoming a detective professionally until the events of “The Gloria Scott”.

Following his decision, he dived in wholeheartedly and began to educate himself in those aspects that he thought would be useful. However, he was still quite unknown and somewhat inexperienced in those days, and not the knowledgeable and world-famous Holmes that would later state, “There is a strong family resemblance about misdeeds, and if you have all the details of a thousand at your finger ends, it is odd if you can’t unravel the thousand-and-first.” This was the period of time when Holmes was accumulating those thousand details at his finger ends. 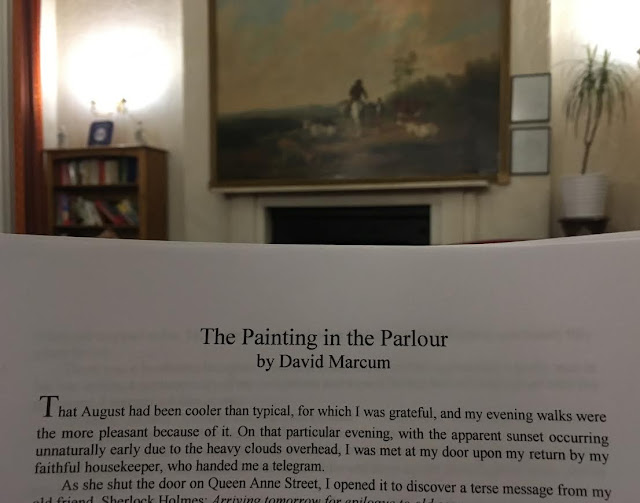 IHOSE: How far back in time do the Before Baker Street stories go? Any tales about Holmes as a child or young adult?

DM: This collection begins in 1862, when Holmes is eight years old, in a story by Jayantika Ganguly called “The Adventure of the Bloody Roses.” We see, even then, that Holmes has some amazing observational skills, and we also get a look at fifteen-year-old Mycroft, giving indications of the man that he would become. Also, this story shows a wonderful connection between the two brothers.

The stories proceed chronologically throughout the book, with Holmes at university and then when he’s moved to Montague Street. The adventures continue through the 1870’s, including a trip to America when Holmes was an actor with the Sasanoff acting company, a part of Holmes’s early life originally revealed in Baring-Gould’s biography of Holmes, and later explored over the years by other “editors” of Watson’s notes. Finally, the book ends with a pair of stories set in 1880, leading to Holmes’s fortuitous meeting with Dr. Watson at Barts, and his subsequent move to Baker Street.

IHOSE: Is Watson completely absent from the collection?

DM: Holmes once said to Watson, “I am lost without my Boswell.” As the keeper of the Archives, Watson has access to the records of many of Holmes’s cases, both those in which he participated, and the ones that he didn’t. This includes the adventures that Holmes had before Baker Street. Therefore, there’s no way that Watson could be absent from this collection.

In this volume, there are a few stories that don’t involve Watson at all, either narrated by someone who encountered Holmes and chronicled the events in his own words, or some told in third person. However, Watson appears in most of these narratives, as he is told about this or that past case by Holmes. Thankfully Watson preserved all of these pre-Baker Street adventures in his tin despatch-box.

IHOSE: What new insights will readers learn about Holmes from these stories?

DM: This collection won’t show Holmes doing anything that is unexpected. There are no stories where he is secretly a wizard or a time-traveler or a criminal or Professor Moriarty’s son. He’s still Sherlock Holmes – possibly a little less skilled about what he’s doing, and certainly not as respected yet by Scotland Yard. But it’s easy to see that he’s on the path to become the Sherlock Holmes that is loved and admired around the world.


IHOSE:  You always seem to be working on a multitude of projects. What can we expect to see from you in the near future?

DM: I’ve found the calm in the eye of the storm that lets me balance a lot of things right now, and hopefully that will last for a while. In addition to spending time with my family and work as a civil engineer, I’m involved in various Holmesian projects that continue to fulfill my interest in supporting the true Sherlock Holmes.

I’m continuing to edit the MX anthologies, and the upcoming volume, The MX Book of New Sherlock Holmes Stories – Part VI: 2017 Annual, will be published on May 22nd, Sir Arthur Conan Doyle’s birthday. The next three volumes after that are already planned out, and amazingly I’m receiving a sizable number of stories for all of them. (The next, Part VII: Eliminate the Impossible, will be out in Fall 2017, Part VIII: 2018 Annual in Spring 2018, and Part IX: Some Untold Cases in Fall 2018.) The author royalties continue to go to support the Stepping Stones School at Undershaw, one of Sir Arthur Conan Doyle’s former homes, and to this point we’ve raised around $20,000.

In addition to those books, I’m involved in editing another Holmes collection of a different sort, and I’ve also written a still-secret and very exciting Holmes-related project – both of which I can’t discuss further at this point, except to say that I’m very happy to be involved with each of them. Finally, I’m working on a new Holmes novel and various short stories for different anthologies, with an eye towards collecting all of these loose tales from the past few years into a new short story collection.

As always, thank you very much for the opportunity to be interviewed, and special thanks to all the authors who have contributed to this and other projects, helping make it all possible. Sherlockians – and especially these Sherlockians! – are absolutely the best people!


For more on David Marcum, visit his blog and Amazon page. You can back Sherlock Holmes: Before Baker Street on Kickstarter until April 24th.