"the world is not yet prepared" [SUSS] 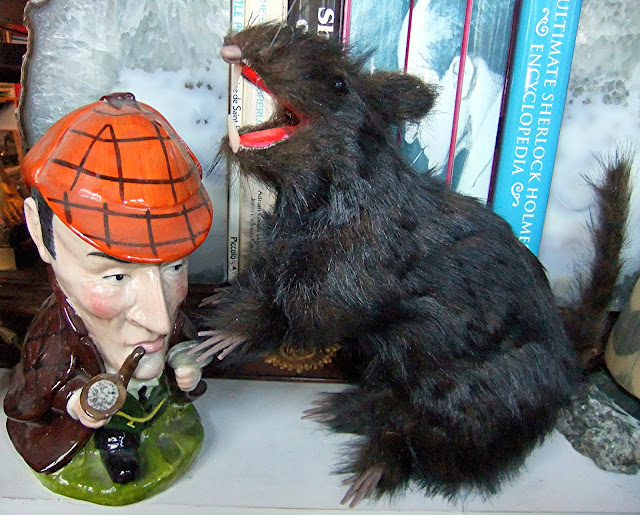 As you probably know, April 4 is World Rat Day.

Oh, you weren't aware? Well, we can't fault you. You're probably still hung over from celebrating Ferret Day on April 2. Now, please put Teddy down and give us your full attention.

The most famous of rodents from the Sherlock Holmes story never actually appeared as an adventure. As one of the most mysterious and tantalizing of the untold tales, the mere mention of the giant rat of Sumatra leaves readers on the edge of their seats, wondering exactly what the case might have concerned.

You'll recall from "The Adventure of the Sussex Vampire":


“Matilda Briggs was not the name of a young woman, Watson,” said Holmes in a reminiscent voice. “It was a ship which is associated with the giant rat of Sumatra, a story for which the world is not yet prepared.

As such, it has become one of the most popular topics of pastiche and parody.

And while the very topic might seem to be a flight of fancy — a literary device or invention out of thin air — giant rats actually do exist.

Dr. Karl Shuker informs us that giant rats are a zoological fact, not fiction. They were first identified in the 1880s by a mammalogist at London's Natural History Museum. But it wasn't until 1983 that researchers determined that the species actually belongs to the genus Sundamys, not the previously assumed Rattus genus.

And in these remote areas of Indonesia (which isn't all that distant from Sumatra), there are still giant rats roaming today. We even reported on one found in the "lost world" of these islands.

Perhaps one way to celebrate World Rat Day is by listening to The Firesign Theatre's album The Tale of the Giant Rat of Sumatra. If you're a fan of puns, this is a treasure trove. If you're not, the first five minutes should suffice.

However you celebrate, try to stay away from eating too much cheese.