Welcome to Undershaw — An Interview with Luke Kuhns 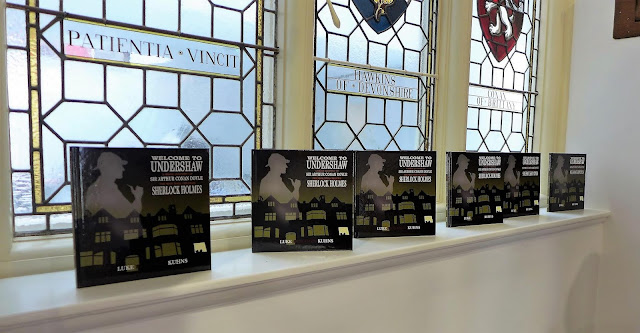 Since 2010, loyal Doyleans and passionate historians have been working feverishly to save and restore Undershaw. In 2014, the former estate was purchased by the DFN Foundation which has been working to both restore Sir Arthur Conan Doyle's study to its original splendor and also to use the property to house Stepping Stones, a school for special needs students. In September 2016, Stepping Stones school officially opened, and the public got their first view of Doyle's restored study.

One person who attended the grand opening was Luke B. Kuhns, author and scholar, whose book about Doyle's history at Undershaw, Welcome to Undershaw - A Brief History of Arthur Conan Doyle: The Man Who Created Sherlock Holmes, was released on October 10th. We interviewed Mr. Kuhns via email about his Undershaw book, the grand opening, and his other Sherlockian work.

Luke Kuhns (LK): It was incredible to see Undershaw alive. To see lights on, people walking in and out, it just felt alive. Finally. What DFN has done is remarkable. I know it cost them a lot more than originally planned, but they spared no expense, to quote John Hammond! The house is beautifully restored. I am very pleased with the extension as well. Rightfully it is architecturally different from Undershaw to show people what the house was in the past and what is new. The addition is beautiful and open and classy. One can turn and look back at Undersaw with reverence.


IHOSE:  Your new book Welcome to Undershaw is a biography of Sir Arthur Conan Doyle in relation to his time spent at Undershaw. Tell us about the book. How did you conduct your research? What makes this biography unique?

LK: I really felt to tell Undershaw's story we needed to know Conan Doyle's story. So the book begins with a look at his grandfather, father, and mother; then him. I explore his life from childhood through to his departure at Undershaw. Research was a mixture of reading many many books, visiting libraries in Portsmouth and London as well as rare book collectors, and spending time in Hindhead. It was very detailed and thorough, and I enjoyed every moment of it.

What makes it unique? Good question! I loved John Dickson Carr's biography...it read like a story. Plenty of Doyle biographies just say "on this date he did this...on this date he did that" and I found it painfully boring. There's a lot he did that is incredibly interesting, and there's a lot he did that is incredibly not interesting...I don't necessarily care who he had dinner with on a particular date! HA! So what I wanted to show people is that Sir Arthur was more than just the writer of Sherlock Holmes stories and The White Company. I explored his life through his writings starting all the way back in his childhood, and art the flows in his family's blood. Yes, all the biographies tell you about his writing, but looking at his life as an accomplished writer first rather than Doctor or anything else, you begin to see how his writing is impacting his daily life and vice versa.


IHOSE: You recently had a story published in Beyond Watson, a Sherlock Holmes story collection where each story had to be narrated by someone besides Dr. Watson.  You chose Violet Hunter as your narrator. What drew you to this Holmes character?

LK: Well, I feel next to Irene Adler she is the next best match for Holmes. Sherlock Holmes and Doctor Watson don't do very much to solve the case. Violet is left to do it herself with Holmes 'on call' should she need him! And Watson recognised this and felt the two would be a good pair...I agree. I didn't want to explore a 'love story' angle with them...no. But I felt she is one of the strongest female characters in his short stories.


IHOSE:  Last year your story collection, The Scarlet Thread of Murder, was released. The first tale in the collection is a bit of a mashup pastiche in that you had Holmes work with another Victorian detective character, Martin Hewitt. Why did you incorporate Hewitt into your Holmes tale?

LK: Widely speaking, no one knows about Hewitt. It's a sad truth. His stories are fun and he held the fort while Holmes took a dip in the Reichenbach Falls. These two (if we pretend they are real) would have been in business at the same time, and Sherlock Holmes, being who he is, would know and recognise talent. The two just work together, not because of their similarities, but because they are both very different but very brilliant! And I wanted to draw attention to other great characters in classic literature that aren't well known.

IHOSE:  You have now written Sherlock Holmes graphic novels, short stories, and a nonfiction book on his creator, Sir Arthur Conan Doyle. What are some similarities you have found in writing these three different genres?

LK: Making interesting crimes is never easy. I take the same approach to writing the stories with regards to plotting. So that is the same too. But the real painstaking work is creating an interesting crime/puzzle that isn't too cliche or overdone and making it work in a quick and believable way.

LK: The Sign of Four. It's my favourite novel...has a great mystery, a treasure hunt, and chase on the Thames. It's great!

IHOSE:  What are your current projects?

LK: I have a script for a new Sherlock Holmes comic book...I'm looking at making that into a reality. I'm currently working on my first non-Sherlock novel, but that's in very early stages with no release date in the near future. I've been changing the format of my website and how I conduct reviews, taking a more audio/video approach rather than text only. That's been fun and very time consuming too. I'm also knees deep in my Master program too...so there's a lot going on and changing of directions. Very exciting.

LK: Thanks for taking the time for this virtual chat! It's been great fun. I look forward to speaking again.


Luke Kuhns is an international crime writer and reviewer. His two best selling novellas Sherlock Holmes Studies in Legacy and The Scarlet Thread of Murder have been praised by critics and fans of Sherlock Holmes. Luke has also authored two graphic novels including Sherlock Holmes and the Case of the Crystal Blue Bottle and the critically acclaimed bone chilling horror Sherlock Holmes and The Horror of Frankenstein, the world’s first Sherlock Holmes and Frankenstein graphic novel.
He has contributed to several crime fiction and academic collections inducing Beyond Watson, The MX Book of New Sherlock Holmes Stories Vol 1, and Fan Phenomena Sherlock Holmes.
His latest title, Welcome to Undershaw: A Brief History of Sir Arthur Conan Doyle The Man Who Created Sherlock Holmes, is a move into biographies. Luke has written a wonderful and unique history about Conan Doyle, his writings and his time living at his Surrey home, Undershaw.
Luke has spoken at the University College London’s Past and Present Conference, debated in the Great Sherlock Holmes Debate 3 and 4, and has been featured on Japanese TV Network NHK. Luke’s official website is a multimedia platform where he releases exclusive short stories and reviews popular tv series, films, books and more.