"Each of These Wore Some Scarf" [VALL] 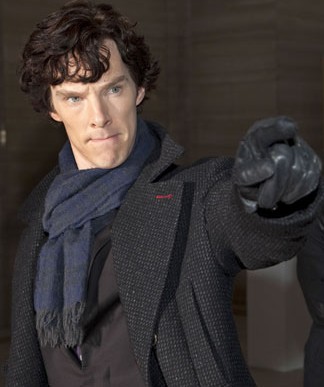 At the PBS Masterpiece/Sherlock question-and-answer event held on May 2 in New York City that brought Sherlock co-creator Steven Moffat, wife and producer Sue Vertue and star Benedict Cumberbatch in close proximity to several hundred avid fans, event host and Masterpiece executive producer Rebecca Eaton asked Vertue (at about the 21:40 mark) about the rumors floating around that she had some connection to CBS’s upcoming Elementary. Mention of the show brought boos from the crowd. After Vertue dismissed any link with the American production, Eaton added, “And we don’t necessarily wish it the best, right?” Cumberbatch replied:

Well, Jonny’s a friend, you know, and as we know with the Robert Downey, Jr. franchise there’s room enough for two, so why not three? It’s fine. It’ll be different and I don’t think it will take away the love from ours and there’s no need to be churlish…about it or what they’re trying to do.

The crowd responded with applause. It was a high point for Cumberbatch in an afternoon that had quite a few for him. In fact, he had been nothing but gracious about Miller and CBS in the months since his appearance. That is, until an article appeared in ShortList magazine (issue 240, 30 August 2012). In a wonderful and far-ranging interview, Cumberbatch, once again, was asked about that other Sherlock:

What do you make of the new US modern Sherlock Holmes adaptation, Elementary? 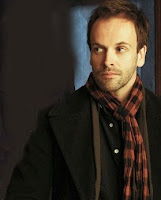 Jonny [Lee Miller] asked me if I was all right with him doing it. I said, “What are the similarities?” And he went, “Well it’s modern...” I went, “Oh.” Then he said, “Lucy Liu’s going to play Joan Watson...” And I went, “Oh.” I got hold of the pilot script just to check it out. I don’t know, we’ll see. I think there’s room for us both to coexist. I don’t feel threatened by it and I wish him the best, which is as diplomatic as I can be.
It’s a strange position to be in...
It’s very odd. I did say, “Well, I’d prefer you didn't do it but you've got a kid to feed, a nice house in LA and a wife to keep in good clothes.” When you get used to a certain standard of living and they waft a pay cheque at you, what are you going to do? I think Jonny was like, “Mate, I've got the  [expletive] mountain to climb here [to reach the acclaim of Sherlock], you've got nothing to fear.” I wish him the best of luck, but I’m a bit cynical about why they've chosen to do it and why they cast him.

Was this a glimpse of Cumberbatch’s real feeling? Was this frustration about being asked, for the umpteenth time, about Elementary? Whatever it was, it was about as close to nothing as one could get. However, to the media journos it was like a catfight between frenemies on The Real Stars of the British Entertainment Industry. It was played up fast and big. In fact, realizing that he came off sounding tetchy, Cumberbatch told this to The Hollywood Reporter:


"I am both bemused and upset at this misquote. I never said that Johnny took the job for the paycheck nor did I ask him not to do it. What I said is I would have preferred not to be in the situation where we will again be compared because we are friends. I know for a fact his motivations were to do with the quality of the script and the challenges of this exceptional role.
"It is baffling because I have only been supportive of an incredibly talented actor who I am proud to call a friend taking a job I know he is going to enjoy immensely and be wonderful in.
"Over 70 actors have played this exceptional character before us. To say that there can be only one Holmes would be ludicrous. We're both thrilled to get the opportunity to play him in a modern context. The world of Sherlock Holmes and the world that we live in now is big enough to take more than one interpretation. As a genuine Sherlock Holmes fan I am greatly looking forward to his series."

If Cumberbatch was misquoted, then we have the "entertainment press" lowering journalistic standards to gin up a story (nothing new). However, read in the full context of the interview, it seems doubtful that ShortList took liberties with the quote. If he misspoke, and answered a question that he's probably been asked ad nauseam less diplomatically and closer to his actual feelings, then, so what? There can be no blame for his natural and very human opinion. And if his quoting of Miller is accurate, then one can only agree with Miller; he does have a Sisyphean task to reach Cumberbatch’s almost universal acclaim.

Now that Elementary has aired, we have Benedict Cumberbatch’s reaction. Speaking at the Cheltenham Literature Festival and as reported by the Radio Times, he said:


Benedict Cumberbatch on Elementary
“Under no circumstances would I want Jonny to have anything but a rip-roaring success because, first and foremost, he is my friend, and we’re both actors and while it’s very gratifying to be told that you are such-and-such a Sherlock Holmes, this is one role, this is one incarnation – and I know it’s why we’re all here tonight – but you can’t take possession of it. He’s the 72nd, I’m the 71st, the 70th was Robert Downey Jr.
“I made a joke, which I shouldn't have done. I made a joke, which never translates – humour, generally, out of context doesn't translate well, that’s one of the lessons I've learnt this summer whilst doing lots of talking (I did it talking about Parade’s End).
“I have to be careful about mentioning anything which could be vaguely misinterpreted, but that doesn't take away from the absolute truth of what I’m saying which is that I’ve seen [Elementary] and it's absolutely fantastic – and the bit where you find out that the killer is, in fact… – it’s really good you should all watch it.
“[Jonny Lee Miller is] phenomenal; he’s completely different; he’s far more contained. He’s stunning to watch as well – he’s just a beautiful specimen, Jonny – and he really knows what he’s doing, he’s completely got under his skin and it’s another Sherlock for he 21st century.
“Was I cynical about them going to him and asking [given that we had worked together on Frankenstein]? Yeah, but I've yet to go and talk to them about where their original thoughts came from to cast him, but I know for a fact that they kept on going back to him so he must have knocked it out of the park in the auditions.
"And I know for a fact that he was dubious about doing it because of myself and, of course, Jude [Law, who plays Dr Watson in the current Sherlock Holmes movie franchise], who he’s known since they were kids. So he felt really nervous, he wasn't sure about it, and he asked if I was alright with it, and I said ‘Of course I am, of course I am,’ and so the thing that always gets quoted now – because people want to sell the programme off two friends who are friends, having a fight that they‘re not having because they’re friends – is that, what I've said, which I haven’t said, which is that I didn't want him to do it – and it’s not true, I didn't  Even what I've just said can now be taken out of context and used against me...
"Just to put a cap on it, I do wish him all the best with it, he’s got a phenomenal job ahead of him because he’s got 12 or 13 episodes and maybe a five-year series.
"And Lucy Liu is wonderful – it’s another great relationship... We should all just suspend our judgement about it until we see it, that’s the thing, isn't it? There was anther [sic] two sheets worth of fish paper in The Times today about it – apparently I’m not happy about it, apparently Steven [Moffat]'s not. I mean, it’s just fine – it’s more than fine, it’s brilliant."

Once again, Cumberbatch has proved he's a class act. It's refreshing to have a star who's not in the papers because of his recent DUI arrest or messy divorce or public meltdown, but because entertainment writers need copy and have to invent controversy.

As to who wears the Sherlockian scarf the best, the reviews of Holmes-watchers on Elementary are decidedly mixed, with a large and vocal contingent voting “nay.” My personal opinion on the debate is, unlike Cumberbatch, I don't think Elementary brilliant, but it has potential and deserves every opportunity to reach it, while Sherlock is brilliant, but far from perfect.

“Applause sign is on. Hold on Benedict, camera two. Fade to black.”


--
Editor's note: James is a long-time Sherlockian and a huge fan of the I Hear of Sherlock Everywhere podcast.