"The Two Gentlemen Passed Us" [HOUN]

It's the end of the year and we're catching up on some of the passings that have occurred over the past couple of months. The following are a pair of BSI obituaries of some longstanding members of the Baker Street Irregulars.

J. Warren Scheideman
J. Warren Scheideman, BSI ("Count Von und Zu Grafenstein") died in a suburb of Chicago on August 25, 2011 at the age of 69. He received his degrees from De Paul University and went on to become a member of the faculty in 1984, moderating poetry readings and teaching things as diverse as Film Noir and Science Fiction. A new course in Film Noir, being taught now, stated on its syllabus,


"This course is dedicated to Warren Scheideman who hatched its plot, investigated its subject, and taught its lessons to many students across many years."

One of his colleagues wrote that Warren’s dissertation on the analysis of curriculum was remarkable, and added that the faculty and students had been inspired and enlightened by his brilliance and thoughtfulness. He wrote a 452-page book on adult learning, which was published by the University and has become an important volume in the world of adult education.

Warren was a member of The Hounds of the Baskerville [sic] and Hugo's Companions. He was widely published in many Sherlockian journals, including the Baker Street Journal and Canadian Holmes, with titles such as "Hugh Boone's Twists on Victorian Society." He was invested into The Baker Street Irregulars in 1982 as "Count Von und Zu Grafenstein." 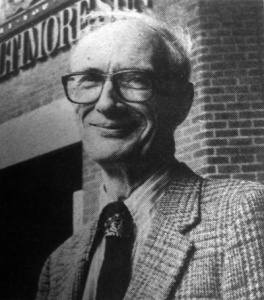 James H. Bready, BSI ("The Disappearance of James Phillamore") died in Baltimore on October 29, 2011 at the age of 92. He graduated from Haverford College in 1939 and earned his Master's degree from Harvard University.
During World War II, Mr. Bready served almost five years in the Army's Counterintelligence Corps in the European Theater. Discharged at 4 p.m. Sunday, Nov. 4, 1945, at Fort George G. Meade, Mr. Bready, still dressed in his uniform, began working as a Baltimore Evening Sun copy editor at 8:30 the next morning. During his long career, Mr. Bready was a general assignment reporter and later feature writer, editorial writer and columnist. He was remembered by his former paper here.

In 1949, Mr. Bready had interviewed Evelyn Waugh, the English novelist who was visiting Baltimore. His counterpart at The Baltimore Sun, who was also assigned to do an article on the writer, was Russell Baker. Mr. Baker recalled meeting Mr. Bready in his 1989 memoir, saying that "The imagination, wit, and graceful lilt of his writing made him one of the glories of the Evening Sun."

In 1954, Bready's first "Books and Authors" column appeared in the Sunday Sun. He became the paper's arbiter of the Baltimore literary scene, vetting books and assigning them for review. At a time when bylines were rationed conservatively and not necessarily a reporter's birthright, Bready was in the position to offer both a book's author, and its reviewer, some ink. This power, coupled with his fair treatment of the region's writers, made Bready a popular name in Baltimore. The column ran biweekly and then monthly through 2005.

For 30 years until 1984, Mr. Bready was the Baltimore correspondent for Time, Life and Fortune magazines, and had been Encyclopaedia Britannica's designated writer for its entry on Maryland.
Mr. Bready was also the author of several books, The Home Team, an illustrated history of Baltimore baseball, and Baseball in Baltimore published in 1998, which is still sold on Amazon.

Mr. Bready was a longtime member of the Baltimore Antique Bottle Club and had amassed through the years an extensive collection of material related to Maryland rye whiskey. In his retirement he wrote the first detailed study of pre-Prohibition Maryland rye, which was published by the Maryland Historical Society.

Mr. Bready was a member of The Six Napoleons of Baltimore and served as their Gasogene in 1954-55. He was invested in The Baker Street Irregulars in 1955 as "The Disappearance of James Phillimore."

--
Please remember these fine men and all previous Irregulars whom we have remembered in these pages. May they rest in eternal peace on the other side of the Reichenbach Falls.