"playing a game with us" [NORW] 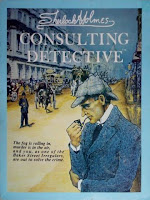 
Editor's note: Kate writes at The Diary of Dr. Watts.
--