"to humour your guilty elder" [PRIO] 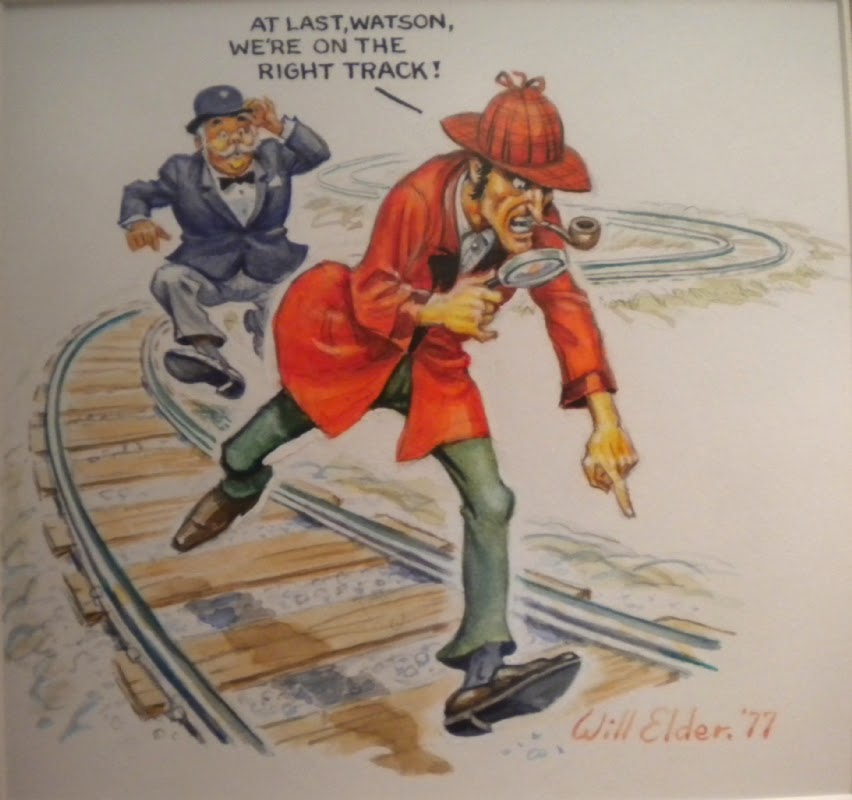 Our updates have been sporadic at best lately (thanks to a demanding job) and the posts we've been able to write have been morbidly focused. Well, today we regret that we have to continue in that vein, but at least it's not announcing the death of another Irregular.

Fans of the audio portion of I Hear of Sherlock Everywhere will know that there are a number of artists who have done their fair share of Sherlockian illustrations. This was made the most clear in our interview with Jerry Margolin ("Hilton Cubitt"), who has made a serious hobby out of collecting original Sherlockian art. The artwork above is from Jerry's collection.

As you listen to the interview, you'll hear that one of Jerry's heroes was Will Elder, one of the original MAD Magazine artists and the creator of Little Annie Fanny for Playboy. We us the past tense - "was" - because Will Elder passed away late last week. You can read a full profile of him on Wikipedia. In the meantime, enjoy the Sherlockian images here by Elder.

Sad news! Will Elder was a jaw-droppingly brilliant cartoonist and caricaturist. (It's not mentioned in the Wikipedia article, but I'm sure that in his days with MAD, he was always credited as "Bill Elder"...)

Hi, I just want to thank you for the kind words about Will's passing. He was a great friend to me for over 30 years and we talked almost weekly by phone. I have great memories of sharing deli sandwiches in his kitchen with his wife, Jean discussing art, Sherlock and many other subjects. He was a funny, gracious man who could not say no to fans. He was very humble and, I think, never really realized how revered he was by all the people who saw and loved his skilled art. I will miss him very much, he will not be replaced. Jerry Margolin, BSI

That illustration is awesome!