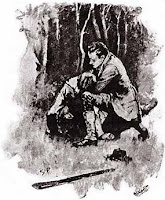 It is once again with a heavy heart that I pick up my keyboard to write of another member of the Baker Street Irregulars passing beyond the Reichenbach. This time the Southern Hemisphere has lost one of its own with the death of Alan Olding ("Cooee!").

According to his biography on his Sherlockian Who's Who page,

Alan Olding migrated to Australia in 1951, after service in the British Army during WW2. He brought with him his new bride, Olive. They lived in Brisbane, Melbourne, and Sydney, before setlling in the Adelaide Hills in 1970. Alan is a retired Insurance Executive. He was invested in the BSI in 1988 under the name "COOEE", and President for the Sherlock Holmes Society of Australia.