Mothers in the Sherlock Holmes Stories

"by the memory of your dear mother" [GLOR] 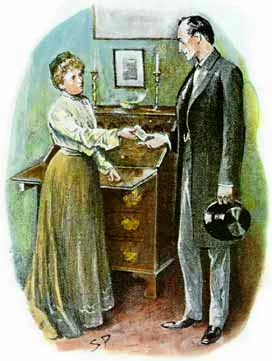 A happy Mother's Day to all of the Sherlockian mothers out there. Parental figures in the Sherlock Holmes stories are a mixed bag (listen to Episode 43: Fathers in the Canon for paternal examples), and in looking for maternal examples, we discovered that there were a good number of people who lost their mothers within the 60 tales.

Many of these these motherless children had tragic and heart-wrenching descriptions of their situation. Of note:
Not to mention mothers who had to bear the unthinkable: the death of a child. Coincidentally, the examples here - just off the top of our head - are all shooting victims.
And we all know how influential Sir Arthur Conan Doyle's mother was in his life - from inspiring him to write "The Copper Beeches," to being a lasting influence on his love life. We learned a good deal more about the influence of "the Mam" in Arthur Conan Doyle: A Life in Letters, edited Daniel Stashower and Jon Lellenberg, which you can hear on Episode 13.

So be good to your mother for Mother's Day. Or honor her memory by doing something of which she would have approved. And for God's sake, lock up the firearms.

Excellent post! Your comments got me thinking of Canonical mothers who prized their selfishness above their own children.

Mrs. Windibank- who aids her husband in deceiving her own daughter to keep money in the family (IDEN)

Mrs. Rucastle- who aided her husband in holding their stepdaughter hostage to keep money in the family (COPP)

Good examples, Christy. But I would argue that Effie Munro [YELL] hid the existence of her child not from selfishness, but from fear of hurting her husband.