"winner of the Jackson Prize" [HOUN] 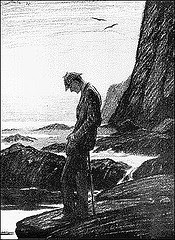 He served in the Army during WWII and was honorably discharged as a Corporal on December 24, 1946, exactly 66 years before his death. Dr. Smith was a psychiatrist for the Baltimore County court system and after his retirement, moved to Port St. Lucie, Florida.

He enjoyed classical music, opera, the Baltimore Orioles, crossword puzzles, and singing in his church choir. When his children were young he listened to the Saturday afternoon Metropolitan Opera broadcasts with the volume turned way up -- inspiring one of his children to a lifelong appreciation of music, and driving the other out of the room.

Jim was Napoleon 178 in The Six Napoleons of Baltimore and gave several solidly researched talks at their annual Saturday with Sherlock Holmes at the Pratt Library. He was also a member of Watson's Tin Box for many years.

At his memorial service his daughter read several passages from the Canon, saying that her father loved the world of Sherlock Holmes. On display at the service was a Six Napoleons of Baltimore tee shirt.

Jim Smith was invested into The Baker Street Irregulars in 1998 as "Winner of the Jackson Prize."