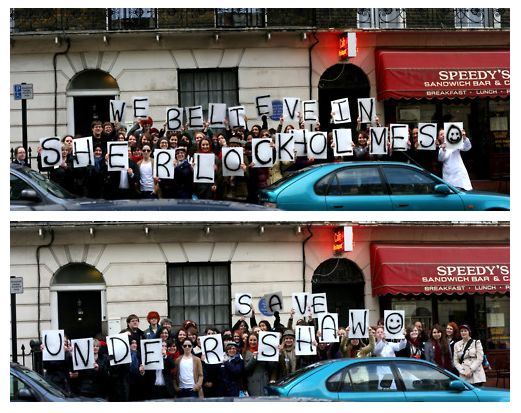 When a fictional character's impact overflows to reality to affect what people are talking about, where they go and how they act, it's quite an accomplishment. When it happens in a nearly identical, if time-appropriate manner nearly 120 years apart, it must have something to to with Sherlock Holmes.

As this podcast is all about Sherlock Holmes, you can rest assured that is indeed the case. But what of it? This updated and renewed interest in our beloved master is curious, but in the end, quite elementary. Much of the chatter and buzz seen on the Internet in particular, has been generated by the Robert Downey, Jr. outings in two films, and more recently by Benedict Cumberbatch's portrayal in two seasons of the BBC television show Sherlock.

In this episode, we welcome the ladies from another Sherlock Holmes-related podcast, the Baker Street Babes, namely Kristina Manente, Maria Fleischhack, and Ardy to discuss the machinations behind the movement that has taken hold across the world called "Believe in Sherlock." With the conclusion (in the U.K.) of the BBC's second season of the show with an episode titled "The Reichenbach Fall," you can probably imagine what the outcome was. We won't spoil it by giving away the details, but suffice it to say that there were some upset fans at the conclusion - so upset, in fact, that they took to the streets and the web alike, demonstrating their love of the character and their wish to see his good name cleared.

We discuss the beginnings of this newfound and fervent interest in Holmes, as generated through the Mark Gatiss and Steven Moffat-created series starring Benedict Cumberbatch and Martin Freeman and get the perspective from Londoners who were not only there to witness the activities of this movement, but who contributed to and even instigated some of them. We'll conclude with a reading of the latest Editor's Gas-Lamp from the Winter 2011 (Vol. 61, No. 4) of the Baker Street Journal.

Download this episode by right-clicking the icon and selecting "Save As..." or simply click on the file to listen, or on the nice box above. (File size: 39.9 MB, 43:30)