"I have figured out your connections" [3GAR] 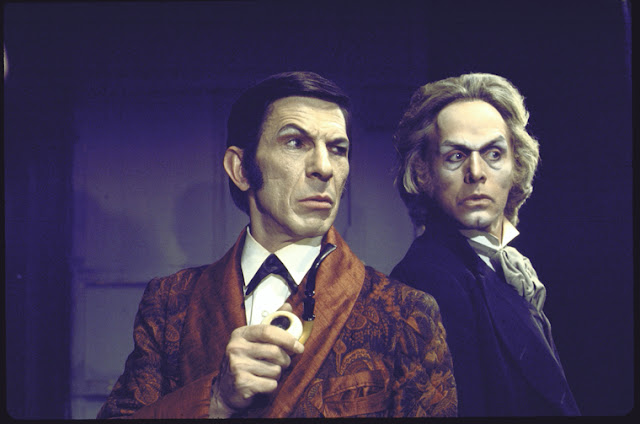 In one of our last posts, we asked for connections between Leonard Nimoy and Sherlock Holmes, and you graciously submitted yours. Thank you for that!

To those of you who were wondering what the connections are, we'll start with our own - we were thinking of three.

1. After completing his run on the Star Trek

television series, Mr. Nimoy returned to the stage. In 1974, he played the title character in the U.S. tour of William Gillette's play "Sherlock Holmes."

2. Around that same time, Nimoy starred in a 15-minute short educational film called "Sherlock Holmes: Interior Motive," in which the origins of the Earth were explained. Here we have a short clip from it. Thankfully, it's not a long clip.

, Nimoy (as Mr. Spock) used the quote, "When you have eliminated the impossible, whatever remains, however improbable, must be the truth." He credited "an ancestor of mine" with saying it first.

Thank you so much for playing along! We'll see if we can develop similar quizzes and fun items for the future.