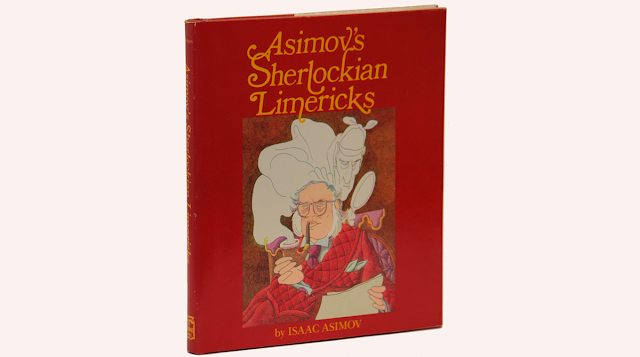 Did you know Isaac Asimov was a member of the Baker Street Irregulars? He received the investiture "The Remarkable Worm" in 1976 (as in "a matchbox in front of him which contained a remarkable worm, said to be unknown to science" [THOR]), in a nod to his profession.

Isaac Asmiov was a prolific author who began his career as an associate professor of biochemistry at Boston University Medical School. After 1958, he made writing his full-time profession and became known for the hundreds of science fiction works he created

from then until his death in 1992. Most notably are his Foundation

and some dozen history books including The Roman Republic

and The Roman Empire

We were moved to write about Asimov because Glenn McDonald recently wrote a column on Pop Matters called "How Sherlock Holmes and Isaac Asimov Can Help Purge your Social Media Addiction." We won't give away the entire column, but McDonald mentioned how he recently acquired the complete collection of Basil Rathbone DVDs and how some of Asimov's titles have kept him off of Facebook and Twitter.

Of most interest for us of course, is the intersection of Sherlock Holmes and Isaac Asimov. We already mentioned the BSI, but one of the relatively unknowns is a book of Sherlockian limericks that Asimov created, aptly titled Asimov's Sherlockian Limericks

. The author was a notorious limerick collector (most of them were of the ribald variety), but these are family-friendly. He created sixty limericks, each one summarizing the story for which it was titled. See if you can pick which stories are represented below.


C.A.M. is the worst man uncaged;
Decent men who meet him are enraged.
He has blackmailing letters
All involving his betters.
But what's this? Sherlock Holmes is engaged?

A bright tale of a dog and a horse
(And there's also a murder, of course)
Which involves the odd fact
That the dog failed to act
Which Holmes found of significant force

Do you know which stories these recount? Leave us a comment!