Episode 31: A Chat with Les Klinger 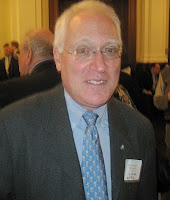 We are delighted to bring you one of the greats of the Sherlockian world in this episode - none other than the Edgar-winning editor Leslie Klinger, BSI, 2s ("The Abbey Grange"). And while it's tempting to craft these show notes entirely out of endnotes and footnotes, we'll give you some meaty content.

Les Klinger is one of the foremost living experts on Sherlock Holmes, having edited a number of books related to the great detective. He also has a vast knowledge of Dracula and has contributed to the literature of that subject as well. We have a representative listing of his works in the links section below.

. He has written numerous books and articles on Sherlockiana and co-edited with Andrew Jay Peck, BSI ("Inspector Baynes, Surrey Constabulary") the revised edition of The Date Being--?: A Compendium of Sherlockian Chronologies and Sherlock Holmes, Conan Doyle & The Bookman: An Anthology of Literary Treasures (1895-1933) with S.E. Dahlinger. He has taught several UCLA Extension courses on "Sherlock Holmes and His World" and has consulted with Warner Bros. on the Sherlock Holmes film series with Robert Downey, Jr. He is co-editing an anthology of Victorian detective stories for IDW Publishing. Les has written The New Annotated Dracula

and is also editing an anthology of Victorian vampire stories for IDW Publishing. He served as the Series Editor for the BSI Manuscript Series and is currently the editor of the BSI's History Series. With Laurie R. King, he co-editing The Grand Game and the duo is currently co-editing a collection of original Sherlock Holmes-inspired short stories called A Study in Sherlock, due out from Random House in December 2011.

Les joins us for a very robust discussion of his passion - mostly editing, writing and lecturing about Sherlock Holmes and Dracula - passions that have seemingly been fueled by a lack of weekend activities of this practicing attorney. He shares with us the beginnings of his interest, the growth of his writing and editing responsibilities and eventual academic post involving Sherlock Holmes, and has recommendations as to where new Sherlockians can get started.

We also have a wonderful audio comment from a listener.

Download this episode by right-clicking the icon and selecting "Save As..." or simply click on the file to listen, or on the nice box above. (File size: 53.8 MB, 58:42)

Part II of this interview can be found here.