"I Should Hope to Inspire" [VALL] 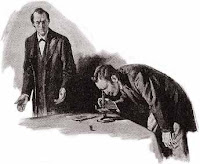 Fellow Irregular Peter Calamai ("The Leeds Mercury") is a science journalist in Canada and always looks for a way to incorporate Sherlock Holmes into his work. You may recall that Peter's review of E.J. Wagner's The Science of Sherlock Holmes

was mentioned in these pages a while ago.

In the current issue COSMOS Magazine, Peter takes on the origins of forensic science in The Real Sherlock Holmes. He describes how Holmes took many widely-used techniques which were common for other purposes - autopsies, footprint identification, chemical analysis, etc. - and he strung them together to create the beginnings of forensics as we know it today. One of the interview subjects mentioned that while certain techniques may have existed, it was Holmes who popularized them.

While we all know about Prof. Joseph Bell as one of the influences behind Sherlock Holmes, Peter makes an interesting supposition as to some other academic role models that Doyle may have drawn upon as well. Take a look at his article and see what you think.

And if you're really interested in Sherlock Holmes and forensic science, you might take a look at some of these books:

Serendipity to see the return of the BSB in the inbox. Scott, you and the Holmesian community have been much missed. Spring is definitely on the way...
Jane (Oxford, UK)